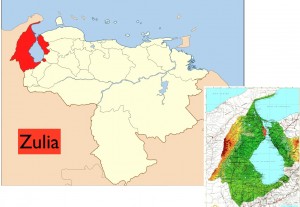 Northwestern Venezuela, especially the state of Zulia, is an anti-Chavez stronghold, noted for its “oppositional “ culture.  As explored in a previous GeoCurrents post, the northwestern Lake Maracaibo area stands apart from the rest of the Venezuela; even consumer products that sell well in Caracas often fail to find a market in Zulia.

In recent weeks, Zulia has experienced mounting troubles. Several leaders of the indigenous Yukpa and Wayuu communities were murdered, reportedly by wealthy ranchers infuriated at indigenous peoples moving into their prime grazing lands (Zulia is a major beef and dairy—and oil—producer). The indigenous movement has occurred with the blessing of the national government, which in 2009 gave communal land titles to 103,000 acres (41,600 hectares) to a number of Yukpa communities. The state-oriented Venezuelan press lays the blame for the recent violence on the U.S., Colombia, and Zulian intransigence, highlighting “the U.S.-funded Plan Colombia, as well as a large, historic, rightwing in Zulia state.” International organizations, however, have reported that the Venezuelan military itself has attacked the Yukpa and other local indigenous groups within the past three years.

Northwestern Venezuela is a resource-rich area in a geopolitically precarious environment. Besides oil and pasturage, the region contains some of South America’s largest coal reserves. Owing in part to tensions between Venezuela and neighboring Colombia, Zulia has been a focus of rebel activity and smuggling. Survival International notes that the Colombian leftist insurgent groups FARC and ELN “have been settling along the border areas of the Bari and Yukpa indigenous communities, bringing in weapons and drugs, and enticing young people to join them and squat on indigenous lands.” Colombian authorities have accused Venezuela of offering sanctuary to FARC rebels, charges that Venezuela steadfastly denies, officially stating that “any rebel groups found in Venezuela would meet with the “iron fist” of the Venezuelan military.” In early June, four Colombian men claimed that they had been tortured by Venezuela police who falsely accused them of belonging to the FARC.

The FARC funds its rebellion in part by drug transshipment, which is a major business in the region. Some sources estimate that roughly 200 tons of cocaine pass through the regional annually. Just this week, the Venezuelan police raided a ship bound from Zulia to Mexico carrying 20 tons of liquid cocaine. A recent article in The Economist summarizes the current narcotics situation in the region:

Venezuela has become the main transit point for Colombian cocaine headed for the United States and Europe. Because of Venezuela’s price controls on fuel—a litre of petrol costs two American cents in Venezuela, compared with up to $1.30 in Colombia—smuggling is another lucrative business. Such opportunities have lured the Zetas, a violent Mexican mob, who have teamed up with a Colombian outfit called the Rastrojos. Together they control much of Colombia’s La Guajira department and Venezuela’s Zulia state.

Media outlets in Zulia are also coming under attack. Earlier this month, the offices of Versión Final were racked by gunfire and those of Qué Pasa were hit with a grenade. Two days after the latter assault, the television channel Catatumbo TV was shot-up. Press freedom in Venezuela has recently been severely restricted, and critics charge the government with failing to protect journalists. The recent attacks in Zulia, however, do not seem to be linked to the Chavez regime. As recently reported in InSight: Organized Crime in the Americas:

While critics of President Hugo Chavez accuse his administration of stifling the media by abusing its regulatory powers or by presenting trumped-up criminal charges against media workers, there is little reason to suspect the state is behind this rash of attacks. The government has previously tried to limit media coverage through legal means; what’s more, the Catatumbo TV network is linked to the state. As such, there may be reason to suspect organized crime is behind the attacks.