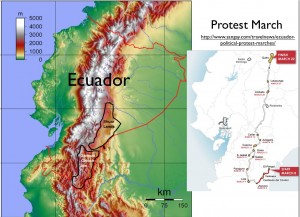 The economies of both Peru and Ecuador are both growing at a brisk clip, due mostly to the booming oil and mining sectors. According to the CIA Factbook, the Peruvian economy expanded by 6.2 percent in 2011, and that of Ecuador at a rate of 5.8 percent. The mining boom, however, has brought environmental degradation and community dislocation, resulting in massive protests.

In Ecuador, hundreds of indigenous protestors have been marching for two weeks from the far south to the capital city of Quito, which they are scheduled to reach today. Road blockades have led to clashes with the police as well as numerous arrests. One teacher was shot and killed. The protests were set off by a deal between Ecuador and China for a 25-year, US$1.4 billion investment in a copper-mining concession in the province of Zamora-Chinchipe. The indigenous peoples in and near the region are demanding the power to veto mines on their lands. Although the government accepts indigenous land ownership in the abstract, it retains sub-surface mineral rights, and thus reserves the right to lease vast concessions.

The protests put the Ecuadorian government of Rafael Correa in a difficult position. Correa is leftist politician who has aligned his country with Venezuela and Bolivia and has pledged to respect indigenous rights. But the mining deals provide the money needed for Correa’s ambitious social programs, which have given him high approval ratings. After finalizing the copper-mining deal with a Chinese firm in early March, Correa stated that, “We cannot be beggars sitting on a sack of gold,” going on to claim that deal would launch a “new era” of industrial mining in Ecuador. A similar dynamic has generated major problems for the government of Evo Morales in Bolivia, where indigenous protests against road-building projects have been heated.

The Shuar people have been particularly influential in the recent Ecuadorian protests. Numbering between 40,000 and 100,000 people, the Shuar live at the margin of the Amazonian rainforest and the Andes. They are perhaps the most powerful and tightly organized of all Amazonian ethnic groups. Formerly known as the Jivaro, they once had a rather infamous reputation due to their practice of making shrunken heads.

Some of the current anti-mining protests in Peru have a very different character. Recent struggles in the southeastern part of the country were set-off by governmental attempts to ban informal gold mining, which has generated massive mercury contamination in local rivers. According to a recent report, “Wildcat miners, who are also protesting in other regions including the south, are demanding the government throw out decrees President Ollanta Humala issued that toughen laws against illegal mining and give the government more power to seize their equipment.”