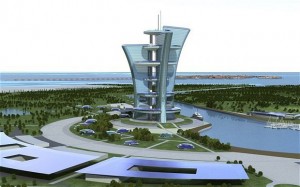 The picturesque Venetian skyline has remained virtually unchanged since 1514, when St. Mark’s Campanile—the city’s largest structure—reached its current shape. Although past its prime in the early 16th Century, Venice remained a center of trade and manufacturing, even ruling directly over Crete, Cyprus and much of the Dalmatian coast. Though the city’s empire is long gone, its form remains a stunningly beautiful and potent anchor for nostalgic sentiment. Enter the French fashion designer Pierre Cardin, whose proposal to build a new sixty story tower comprised of “three fin-shaped towers connected horizontally by six huge steel discs” (pictured at left) on the mainland near Venice has drawn heavy criticism. The building, dubbed the “Palais Lumière,” would be built in a currently abandoned industrial area in Porto Marghera, which lies about two miles from Venice (see map below), and include residential, commercial, industrial, and public areas. The project appears to be slowly working its way through the Italian bureaucracy, but that hasn’t stopped an outpouring of anger from preservation-minded Venetians.

Cardin’s supporters, like the head of Italy’s Vento region Luca Zaia, have heaped praise on the project, calling Cardin a “21st Century Lorenzo the Magnificent” who’s project will herald the “start of the renaissance of the whole Porto Marghera area”. Cardin’s nephew, Rodrigo Basilicati, is an architect by training and has taken the lead role in working out the technical aspects of his uncle’s vision. Basilicati grew up in a small town about ten miles from Porto Marghera, and sees the tower as a way to revitalize a desolate area. “We chose this apparently ugly and difficult location because we hope that it will convince other people that Porto Marghera can enter a new chapter,” he says. With Italy as a whole facing 10.8 percent unemployment and government bond yields around six percent, depressed areas of the country like Porto Marghera have good reason to welcome the influx of €1.5 billion ($1.85 billion) that the project would provide.

Porto Marghera, the future home of the Palais Lumière, is the large ‘carrot key’-shaped area on the left.

The potentially negative impact of the tower on Venice’s traditional character and allure is the main motivation for its opponents. Rather than trading Eastern European slaves and timber for Asian spices and silk as in the days of yore, Venice’s economy now depends on the 60,000 daily tourists who come to spend large sums of money as they stroll and dine along its canals. The new building would be about twice as tall as St. Mark’s Campanile, and even its position miles from the city does not assuage fears that it will impinge on the beauty of Venice. Italian historian Tomaso Montanari has likened the project to buildings in Dubai that many consider garish, noting that the Palais Lumière looks like it was designed by the “emirs of the Gulf.” Others have called the building “a spaceship dumped into the lagoon”, and derided it as “ugly and useless.” Italian architect Vittorio Gregotti addressed Cardin saying “Dear Pierre, if you want to do something for Venice, think of something else.” According to the LA Times, the Italian cultural group Our Italy fears that construction would jeopardize Venice’s status as a World Heritage Site—though that is certainly baseless hyperbole.

The word “imbroglio” supposedly has roots in the famously confusing and intricate politics of republican Venice, and it fits the current situation quite well. Every year brings new stories about how Venice might soon sink beneath the sea, and among the architecturally minded the city is more often seen as a symbol of “elegant decay” than a living and breathing place for people. Will a new tower on the opposite side of the lagoon re-energize Venice, or will it forever mar the views that make the city beautiful? The most likely answer is ‘neither’, but Venetians will just have to wait and see.