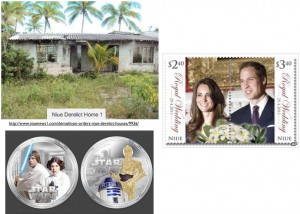 The health minister of the remote Pacific island of Niue recently visited New Zealand to try to convince Niueans living there to allow the demolition of their abandoned houses back home. He came equipped with photographs of the island’s many derelict houses. According to Radio New Zealand, “Vegetation and vermin have overtaken dozens of homes, creating what officials describe as an eyesore and a health risk.”

Niue, a Polynesian island of roughly 100 square miles (260 square kilometers), is a self-governing dependency of New Zealand. As a result of the political connection, residents of Niue can freely move to New Zealand—and most have. Although the island’s population is less than 1,400, more than 22,0000 Niueans live in New Zealand.

Niue’s government has made numerous attempts to enhance the local economy and encourage people to stay on the island. As the Wikipedia notes, “In 2003, Niue became the world’s first ‘WiFi nation,’ in which free wireless Internet access is provided throughout the country.” Niue is currently attempting to establish a shipping register, hoping to profit from shipping lines looking to fly a “flag of convenience.” Niue has also tried leveraging its geopolitical status into moneymaking endeavors. As a quasi-independent state, Niue can mint its own coins and make its own postage stamps. Here it aims for the collectors’ market. In 2011, Niue gained global attention when it announced that it would issue 50,000 copies of silver-plated “Star Wars” coins. Earlier in the same year, Niue angered the United Kingdom when it issued “stamps marking Britain’s royal wedding which have a perforated line that splits the happy couple.” The Prince William portion of the divisible stamp is worth NZ$3.40, whereas that of Kate Middleton is valued at NZ$2.40.