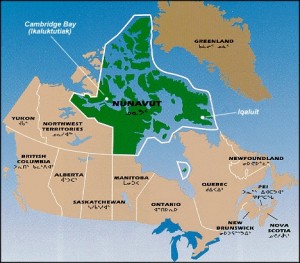 Major protests against the high price of food and economic insecurity more generally were held last weekend in the remote northern Canadian territory of Nunavut, inhabited mostly by Inuit (“Eskimo”) people. Organized on Facebook, the “Feed My Family” campaign has attracted roughly a third of Nunavut’s population.  A recent study found that some “three-quarters of Inuit preschoolers live in food-insecure homes, and that “half of youths 11 to 15 years old sometimes go to bed hungry.” Food is exorbitantly expensive in Nunavut because almost all of it must be brought in over vast distances from southern Canada or elsewhere. As a result, a single head of cabbage can cost as much as twenty dollars.

Nunavut is a vast territory, roughly the size of Mexico, but it contains only about 32,000 people, some 84 percent of whom are Inuit. Traditional hunting, fishing and gathering practices are still carried out and contribute to feeding the population, but most of the people of the region are now dependent on imported food. Hunting, moreover, now demands modern inputs, and hence is itself an expensive proposition. According the article cited above:

Nunavut’s larder of “country food” — caribou, seals, fish and other animals — is there for the taking, but only if people can afford the snowmobiles, gas, rifles, ammunition and gear needed to travel safely. Elliott estimates hunting costs about $150 a day.

Although a poor region by Canadian standards, Nunavut does possess a large array of natural resources, and mining activities in the territory are increasing. Currently the Canadian government is negotiating with territorial leaders to allow Nunavut to have “province-like” powers over local resource development and to collect mining royalties directly. As a recent National Post article emphasizes, “Mining companies spent more than $300 million in 2011 alone on exploration and development in the territory…”  Yet the same article also notes that “years of negotiations are likely to follow.”

Many Inuit leaders support mining in their territory, but most insist that their community should have substantial input in the development process. Most of their efforts in this regard are carried out through Nunavut Tunngavik Inc., a native corporation designed to “ensure that promises made under the Nunavut Land Claims Agreement (NLCA) are carried out. Inuit exchanged Aboriginal title to all their traditional land in the Nunavut Settlement Area for the rights and benefits set out in the NLCA.” In April of this year, Nunavut Tunngavik Inc. “received the first royalty payment as a result of mineral production on Inuit Owned Lands. The royalty payment of $2,249,500 was made by Agnico-Eagle Mines Ltd. from its Meadowbank Gold Mine north of Baker Lake.”