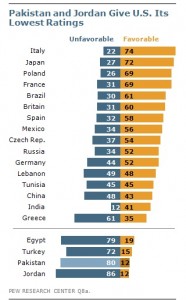 Significant as these findings may be, they are not exactly surprising. Nor is the poll’s revelation that Pakistanis retain highly negative views of India, with 59 percent of respondents considering it their country’s greatest single threat. Equally expected is the negative reaction from the other side of the border: 59 percent of Indians view Pakistan as a “very serious threat.” Less expected are the Pew findings that people of other countries also tend to have negative views of Pakistan, with high “unfavorability” ratings noted even in Jordan, Egypt, and Tunisia.

The Pew Pakistan survey does reveals some intriguing trends. Pakistanis are evidently less concerned about extremism in their country than they were a few years ago, with support for military assaults against the Taliban plummeting from 53 percent in 2009 to 32 percent in 2012. Yet at the same time, actual advocacy of extremism is declining. In 2008, 27 percent of respondents looked favorably on the Taliban, whereas in 2012 the figure stood at 13 percent. The favorability rating of the Haqqani Network, which has bedeviled NATO in Afghanistan, is lower still, coming in at 5 percent. 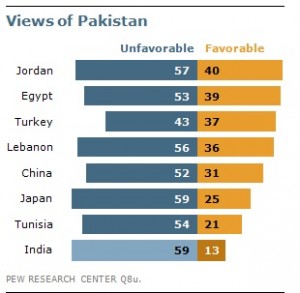 The Pew survey has little information on geographical differences in public opinion within Pakistan, but what it does have is significant. In the Punjabi-speaking core, only 49 percent of respondents regard the Taliban as a serious threat, with a mere 38 percent viewing al Qaeda in the same light. In Khyber Pakhtunkhwa, on the other hand, 75 percent see al Qaeda as a serious threat and 94 percent have the same view of the Taliban. As the Taliban is primarily a Pashtun organization that is often seen as pushing a Pashtun agenda, the antipathy toward it in the Pashtun-dominated province of Khyber Pakhtunkhwa is striking. But the people of Khyber Pakhtunkhwa have suffered much more from Taliban attacks than have those of Punjab. It would be interesting to assess the level of support for extremism in the Federally Administered Tribal Areas, where the Taliban and the Haqqani Network maintain bases, but the region was considered too insecure for Pew pollsters to examine.

Perhaps the most striking aspect of the report is its finding that religious devotion correlates negatively with support for violent Islamism in Pakistan. Among those who pray the requisite five times a day, 72 percent are reported to view the Taliban unfavorably, whereas among those who pray less often, the figure is only 62 percent.