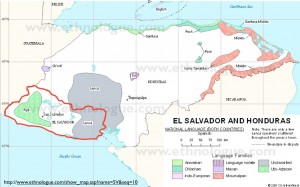 Census figures indicate that El Salvador’s indigenous population is negligible, representing just 0.2 percent of the population. According to the standard national narrative, the county is almost entirely mestizo (of mixed European and Native American ancestry), its indigenous languages having disappeared long ago in favor of Spanish. Indigenous rights associations, however, present a very different picture, arguing that up to 17 percent of the population should be classified as indigenous, belonging to the Nahua-Pipil, Lenca, and Cacaopera ethnic groups. The discrepant figures, they claim, derive from a relatively recent history of ethnic violence. In 1932, the government crushed a peasant revolt that had strong indigenous roots, killing tens of thousands of people in the process. Subsequently, it banned the use of the Pipil language, and villagers began to hide their indigenous roots for fear of reprisals. According to the Wikipedia, Pipil now has only 20 native speakers, although it lists the ethnic population at 20,000. The Ethnologue map posted here greatly exaggerates the extent of indigenous languages in El Salvador.

Pipil is a Nahuan language that is very closely related to the Nahuatl of the Aztecs, spoken today by some 1.5 million people in Mexico. Yet El Salvador was never part of the Aztec Empire. Instead, the language seems to have been introduced to the region much earlier, perhaps in the 12th century by refugees fleeing the Toltec capital of Tula after a bloody civil war.