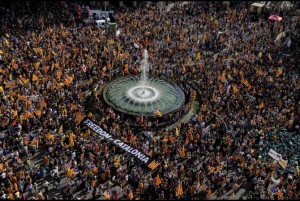 Fear are mounting that Spain will face a new secession crisis after the government of Catalonia called for a snap election on November 25, which is widely seen as a referendum on enhanced autonomy if not outright independence. The move came shortly after the Madrid government rejected Catalonia’s demand for greater autonomy on taxation issues. Desire for political separation is growing in the region, as evidenced by massive (600,000+) pro-independence demonstrations in Barcelona earlier this month. Catalonia is Spain’s most indebted region, and one of its wealthiest ones as well, and most Catalans believe that they pay a disproportionate share of taxes.

The Spanish constitution bans outright votes on secession, and it is unclear in any event if most Catalans want full independence or merely enhanced autonomy. The central government, however, is taking the current challenge very seriously. According to blogger Tyler Durden, “the Spanish Military Association (SMA) has warned Monday that those who cooperate or allow ‘fracture’ of Spain should ‘respond with all the utmost rigor’ in the courts in the field of military courts by the ‘serious charge high treason.’”