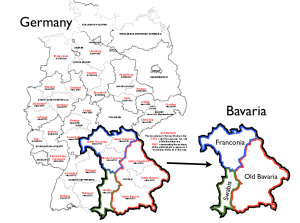 Bavarian separatism, a long-standing if still rather minor political movement, is finally getting some attention in the global media, thanks to the recent publication of Bayern kann es auch allein (or Bavaria Can Also Go It Alone), a book described by Canada’s Maclean’s as a “191-page polemic covering a range of standard Bavarian complaints about the present German (and European) political order and a paean to the benefits and glories that await an unfettered Free State of Bavaria.” Framing the issue in Canadian terms, the Maclean’s article notes that Bavaria is a bit like a combination of Quebec and Alberta: culturally distinctive from the rest of the country (like Quebec), and also more prosperous and more conservative (like Alberta). The New York Times claims that “Bavarians, who have an independent streak akin to Texans in the United States, can handle marching orders ‘from Berlin or Brussels, but both together is too much…’” (quoting a local source).

The separatist Bavaria Party (Bayernpartei, BP), however, rarely gets as much as one percent of the vote in local elections in recent decades, although in the 1950s it occasionally scored in the double-digits and in 1949 it received over 20 percent of the vote in the Bundestag election. But the European economic crisis, coupled with the large fiscal equalization payments that Bavaria makes to other regions of Germany, could result in a certain resurgence.

The separatist movement, however, faces a distinct challenge in the fact that not all of Bavaria is culturally Bavarian. The Bavarian dialect (which many linguists regard as a separate language) is mostly limited to Altbayern, or Old Bavaria, composed of the Regierungsbezirks (“government districts”) of Upper Bavaria, Lower Bavaria, and Upper Palatinate. In the Napoleonic period, several historically and culturally non-Bavarian districts were appended to the state. These include the three Franconian districts, where the East Franconian dialect is found, and Bavarian Swabia, whose residents traditionally speak a variety of Alemannic German. Few residents of these areas have much use for Bavarian nationalism (or sub-nationalism) in any of its guises.

The actual geographical situation, however, is rather more complicated. As it turns, a few small areas in both Bavarian Franconia and Swabia do belong to Altbayern, as does the Austrian region of Innviertel.