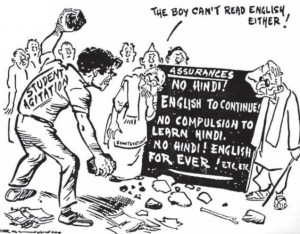 Yet another political cartoon controversy has embroiled India in recent weeks. The cartoon in question dates to 1965, when opposition to the planned imposition of the Hindi language across India generated unrest over much of the country and especially the southern state of Tamil Nadu. Tamil activists feared that the imposition of Hindi would reduce non-Hindi speakers to the status of second-class citizens, and thus agitated for the continuing use of English as the country’s unifying, common language. In the end, the government backed down, allowing the perpetuation of English in official communication and granting each Indian state the right to establish its own official language or languages.

The cartoon is currently generating controversy due to the fact that it has been recently included in a political science textbook. Tamil partisans claim that the drawing unfairly represents the student organization that led the anti-Hindi demonstrations in the 1960s, falsifying history in the process. While the cartoon depicts the students leaders as ignorant of the English language, opponent of the textbook argue that, “As far as English is concerned, few could match Tamils in acquiring the skills of the language.” They also claim that the cartoon hides the fact that the government of Tamil Nadu at the time reacted to the anti-Hindi agitation with harsh repression. 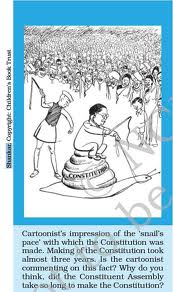 Several other cartoon controversies have agitated India in recent months. Many Indians were outraged at the use in another textbook of 1949 sketch that depicts Jawaharlal Nehru wielding a whip and chasing a snail-riding B. R. Ambedkar in order to speed up work on India’s constitution. Ambedkar, the dalit (“untouchable”) mastermind of the constitution, is a much-idolized figure, especially among lower-caste Indians, and is thus not to be trifled with. Another recent cartoon controversy in the Indian state of West Bengal was analyzed in a separate GeoCurrents post.

A number of Indian advocates of free expression have been outraged at the outrage expressed over these cartoons. Intriguingly, the noted—and aged—Communist stalwart V S Achuthanandan responded with particular force, arguing that “I am a subject of large number of cartoons. I always enjoy them and try to understand the message sought to be conveyed through them. In a democracy, tolerance and readiness to face criticism are vitally important.” (In contemporary India, “communists” generally seek power through the ballot box, whereas “Maoists” advocate—and engage in—revolutionary violence).