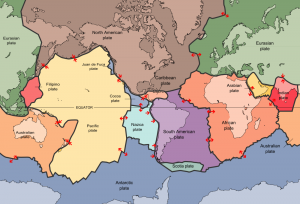 In April 2012, two massive earthquakes hit northern Sumatra. The earthquakes—one of magnitude 8.2 and the other 8.6—were far in excess of what one would expect to encounter many miles from a tectonic plate boundary. Indeed, “strike-slip earthquakes”, where pieces of crust rub against each other laterally, had been completely unknown in the area before the two quakes. Now, researchers from the École Normale Supérieure in Paris argue that the quakes are a manifestation of a new fault line dividing the erstwhile Indo-Australian Plate (see U.S.G.S. map at left). According to the researchers, the infamous earthquakes that hit nearby Aceh in 2004 and Nias in 2005 played an important role in this development. Although the 2004-2005 events were typical earthquakes near a known subduction zone, they may have aided the “intraplate deformation” process sustained by April’s earthquakes. If born out, the research means that the number of major tectonic plates on the Earth’s surface has risen from twelve to thirteen.

The Indo-Australian Plate separation, even if it is still incomplete in some areas, is usually recognized as a forgone conclusion among geologists. During the 1970s, scientists discovered a six hundred mile zone of broken and disfigured crust along the floor of the Indian Ocean. This breakup zone has been in the making for between eight and ten million years. The “Indian Plate” has continued to move north, colliding with Eurasia as it has done for about 50 million years. The “Australian Plate”, meanwhile, has been moving away from the Indian Plate in the west, while crashing into it in the east and causing the pressure that has yielded the new Sumatran earthquakes. The basic dynamics of the situation have been recognized since a 1995 report by researchers from the Lamont-Doherty Earth Observatory at Columbia University.

The Indo-Australian Plate separation may seem like a mostly academic issue, but it promises to have major consequences for the new fault region, and perhaps the rest of the world as well. Parts of Sumatra and environs once thought to be relatively safe can expect more mega-quakes and tsunamis in the future. As New Scientist ominously puts it, “Things should become clearer as more earthquakes shake the region.” Moreover, according to researchers from the U.S.G.S., April’s earthquakes set off uncommonly large aftershocks all over the world. Before April, only one earthquake greater than magnitude 5.5 had been recorded as an aftershock more than 1,500 kilometers from the epicenter of the “mainshock” that caused it. During the six-day span after April’s magnitude 8.6 earthquake, the world experienced five times as many remote earthquakes greater than magnitude 5.5 as it normally does. In short, the new strike-slip fault dividing the Indian and Australian plates means business.

The breaking of a tectonic plate is a difficult process to fully comprehend. The Indian Plate is one of the thinnest plates on Earth, but still represents roughly 100 vertical kilometers of rock. The plate’s relatively slender profile is likely the result of melting due to the same massive lava plume that broke up Gondwanaland 90 million years ago and more recently created the Kerguelen microcontinent.

The Indian and Australian Plates were not always joined at the hip; researchers think they only fused about 43 million years ago with the cooling and solidification of former spread regions. In light of their independent histories and the rather awkward-looking shape of the Indo-Australian plate, perhaps the longtime union of the Indian and Australian plates—rather than their separation—is what requires more explanation. It is quite rare for changes taking place on a geologic timescale to manifest themselves clearly during a matter of days and months, but it appears that the present is indeed such a time.