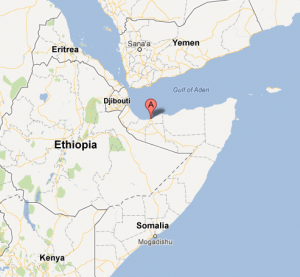 Today Berbera is a city of about 100,000 located on the coast of Somaliland, an unrecognized state occupying the northern portion of Somalia. As the only sheltered seaport on the South shore of the Gulf of Aden, Berbera’s economic fate is thoroughly entwined with that of Somaliland. Currently, Berbera’s main export is livestock, earning it the name “Aden’s butcher shop”. The port exported 2.5 million cattle in 2010, most of which found their way to Saudi Arabian, Yemeni, or Egyptian dinner tables. The export of livestock provides over half of Somaliland’s GDP and almost all of the currency that allows its internal economy to function. Recently, the money-transfer firm Dahabshiil Group, Somalia and Somaliland’s largest company— and its closest thing to a bank—donated hundreds of livestock to hospitals around the region to encourage philanthropy during the Muslim holy moth of Ramadan.

Berbera has been an important port since at least the first century CE, when a Greek merchant described its wares: “There are imported into this place … drinking-cups, sheets of soft copper in small quantity, iron, and gold and silver coin… There are exported from these places myrrh, a little frankincense, … the harder cinnamon, duaca, Indian copal and macir, which are imported into Arabia; and slaves.” The city’s history is rather hazy, but it eventually succumbed to the Ottoman Empire and later to the British, who described it as “the true key of the Red Sea”. During the Cold War, Berbera’s perceived strategic value led the Soviet Union to build the city’s current port as well as a runway for limited air traffic.

They city’s current port infrastructure is sufficient to ship goats and cattle across the Gulf of Aden, but upgrades will be needed if the port—and the country—is to encourage the development of higher value-added industries. No private investors have stepped up yet, but Somaliland remains optimistic. Coca-Cola recently opened a $17 million bottling plant 54 miles from Berbera, where an underground river affords easy access to freshwater. The Coca-Cola plant is Somaliland’s largest private investment ever, and according to the Guardian relied on half-century old Chinese surveys and the advice of local elders in order to locate the underground water supply.

Pirates remain a problem for Berbera, which has lost two fully laden ships during the last year. The risk of losing everything to a pirate attack constitutes an intolerable amount of uncertainty for many merchants, though there has been a marked decrease in pirate activity since the mid 2000’s. Somaliland takes the problem very seriously, and the Somaliland Counter-Piracy Co-ordination Office is currently working with the United Nations Office on Drugs and Crime to educate citizens about the evils of piracy. The full brunt of its campaign is expected to begin in September. Berbera’s efforts to make its port safer and more attractive to shippers put it in direct competition with nearby Djibouti, which has traditionally hosted a significant share of Somaliland-bound shipping.

The outcome of Somaliland’s quest for diplomatic recognition will likely hinge on the extent to which it can show it has developed the institutions necessary to support a peaceful and prosperous society. Though the political action will be taking place in the capital of Hargeisa, Berbera promises to be vital part of the country’s future.