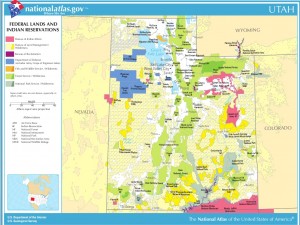 A recent political maneuver by the state government of Utah is stirring up intense  controversy. “Utah’s Nuttiest Idea of All,” reads a June 2 headline in the Salt Lake Tribune. A more recent opinion piece by geographer Eric C. Ewart in the same newspaper argues that that the move is blatantly unconstitutional and will “derail the largest single part of Utah’s economy: tourism.” Looking into the future, Ewart contends that tomorrow’s youth will be asking their elders, “Grandpa, why did you destroy Utah’s natural landscapes in search of quick profit?”

The maneuver in question is reflected in a series of bills passed by the Utah state legislature and signed by Governor Gary Herbert that demand the “return” of most federal lands in Utah to state control by 2015, totaling some 30 million acres (12.14 million hectares). Although national parks and military lands would be excluded, national forests, national monuments, and wilderness areas managed by the Bureau of Land Management would be slated for transfer. Utah is also, as Ewart notes, “suing the various federal agencies in order to gain access to 12,000 miles of closed and abandoned ‘roads’ … including stream beds, cow paths, wagon trails and footpaths.” Much of the money gained by the proposed transfer, supporters argue, would be earmarked for education. Critics contend that the scheme would amount to a massive give-away to mining, ranching, and property development interests, noting that the Utah’s government does not have the wherewithal to manage the lands, and would thus turn them over to private interests. 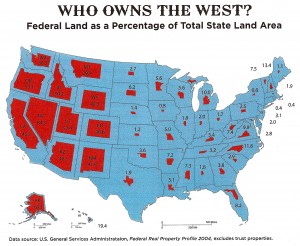 The “defederalization” of public lands is a popular idea in Utah. The federal government currently owns fifty-seven percent of Utah’s land, the third highest figure in the country. Polling data show that 64 percent of Utahans are in favor of the proposed change. Views on the subject break down on party lines, with 84 percent of Republicans and 59 percent of independents supporting the proposal, as opposed to only 15 percent of Democrats. (Utah, it is important to note, is perhaps the most Republican-voting state in the union.)  As a recent Salt Lake Tribute article notes, “Respondents also showed a stark religious gap, with 77 percent of Mormons supporting the land quest and only 34 percent of non-Mormons doing the same.”

Opposition to federal land control is widespread throughout the interior West of the United States. Hostility reached a peak in many areas during the so-called Sagebrush Rebellion of the 1970s and 1980s, which focused on resisting federal restrictions on mining and grazing on public lands. It is interesting that the current manifestation of the anti-federal movement is much stronger in Utah than in neighboring states. Utah is more Republican-oriented than its neighbors, but states such as Wyoming and Idaho are almost as conservative. It may be significant that a much larger expanse of Utah’s federal lands are managed as national monuments, which are largely off-limits to development, than those of other western states. Many Utahans were outraged in 1996 when president Bill Clinton designated 1.9 million acres (769,000 HA) in southern Utah as the Grand Staircase-Escalante National Monument, forming the largest national monument in the United States. Environmentalists across the country, however, were delighted by the action.