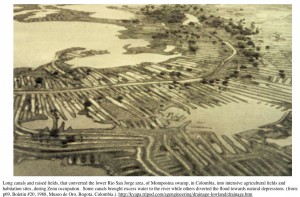 A number of news reports from French Guiana have focused on a recently published scientific article on pre-Columbian agriculture in the region, which offers potential lessons for current-day land-use. Several of the reports express surprise at the researchers’ findings, which indicate that the indigenous peoples of the region were able to successfully grow crops without using fire to clear the vegetation, as has more recently been the norm. According to one news report, “Reintroducing these traditional farming methods to the region could help to preserve the natural ecosystem that is being rapidly destroyed by burning, industrial agriculture, and cattle ranching.”

The key to the pre-Columbian system was raised fields, artificially elevated platforms that allow farming in seasonally (or permanently) inundated wetland environments. Raised fields provide drainage yet maintain adequate levels of soil moisture. Fertility is maintained by periodically scooping muck out of the ditches between the fields and depositing it on the cropping beds. As a result, permanent cropping with high yields was possible in difficult environments with low natural soil fertility. Maintaining the beds, however, was labor intensive, and when populations plummeted after Eurasian diseases spread, the system was abandoned almost everywhere, replaced by un-intensive swidden (“slash and burn”) farming in forested areas, which uses fire to clear vegetation for short cropping periods.

The research is important, and I am pleased to see it being reported. Yet the news articles on the topic are misleading, as they imply that such findings are novel, fundamentally changing our perceptions of the history of agriculture in the Latin American tropics.  Actually, geographers and other archeologists have been intensively studying pre-Columbian raised fields since 1965, when Berkeley geographer James Parsons noted massive geometrical formations when flying over a lowland area of Ecuador. By the 1980s, so much work was being done on the subject that geography graduate students began to joke about the new discipline of “raised fieldology.”