Reports of recent massive surface melting on Greenland’s central ice cap have circulated widely in the global media. According to NASA, the area exhibiting a surface thaw expanded from 40 percent of the ice sheet to 97 percent in a mere four-day period this July. As reported by Canada’s CBC News, “You literally had this wave of warm air wash over the Greenland ice sheet and melt it,” NASA ice scientist Tom Wagner said Tuesday. “Cooler air soon returned, however, refreezing much of the area that had previously melted.

Although the temporary melting was undeniable, controversy nonetheless erupted. As discussed by Andrew Revkin in the New York Time’s Dot Earth features, the NASA press office made a major error in calling the event “unprecedented,” as similar surface melts have evidently occurred, on average, once every 150 years. Despite such previous episodes, the recent thaw is generating much concern, as Greenland’s ice cap has been retreating in recent year, a phenomenon that most climatologists link to global warming.

Reporting on the event by mainstream news outlets also leaves much to be desired. In a video accompanying the CBC article, for example, the reporter claimed that, “This month nearly all of the ice on Greenland melted.” Had “nearly all” of Greenland’s ice actually melted, global sea levels would have risen by some 6 meters, as the ice cap is on average 3 kilometers (1.9 miles) thick.  Although the melting was extensive, it did not penetrate very deep into the massive glacier. 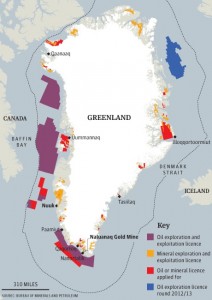 Although the current retreat of Greenland’s ice cap worries climatologists and environmentalists, it is also exciting the imaginations of mining firms. According to a recent article in the Guardian:

Europe is looking to open a new frontier in the ever more urgent quest for new natural resources – the pristine icy wastes of Greenland. Oil and gas have been the focus of exploitation so far – but the EU sees just as much potential in a massive opening up of mining operations across the world’s biggest island, according to Antonio Tajani, the European commission’s vice-president and one of the most powerful politicians in the union. He called the move “raw material diplomacy”.

The article goes on to mention that while only one gold mine is currently in operation on Greenland, five are in the advanced planning stage and more than 120 potential sites are being investigated. The author also notes that Greenpeace is working to forestall potential mining operations on the island.