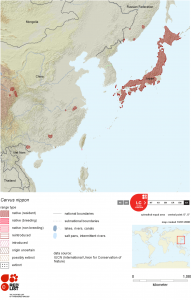 The sika deer (Cervus nippon), once widespread across eastern Asia, has been eliminated from virtually its entire range. The animal is extinct in Korea and barely hangs on in China and far eastern Russia. In Japan, however, the deer population is exploding, resulting in major agricultural and forestry losses. Authorities in the mountainous Japanese province of Nagano in central Honshu are now encouraging people to hunt deer. Hunting is diminishing as older hunters retire and as rural areas depopulate, leading wildlife officials to use traps and other expensive methods of culling the herds. A new organization called Shinshu Gibier Kenkyukai* (“game study group”) is thus encouraging people not only to hunt but also to eat venison, which it hopes will soon be served in school cafeterias.

Other groups have different ideas for dealing with the problem. The Japan Wolf Association, for example, would like to reintroduce wolves into Nagano to prey on the deer. Wolves were once present in Japan, but the two local subspecies were wiped out in the late 1800s and early 1900s, as documented in Brett Walker’s The Lost Wolves of Japan. If wolves were to be reintroduced—an unlikely event—a different subspecies would have to be selected.

A recent article in the Japan Times proposes a more audacious solution for the deer excess in the northern Japanese island of Hokkaido: tigers. As the author specifies:

How about solving two problems in one? Help save the tiger by translocating Siberian Tigers to Hokkaido — the habitat is very similar — and help reduce the deer population by introducing a predator. One could even help the flagging tourist trade, by operating tiger-watching tourism in Japan (why should India have all the fun?). Of course, this off-the-wall idea is untenable in a number of ways: Imagine trying to obtain local community consensus for introducing tigers in their forests.

For an excellent overview of the sika deer, see this article in the Large Herbivore Network, which is the source for the map posted here.