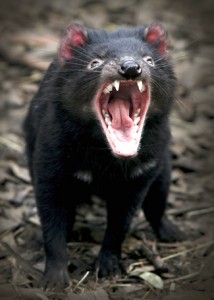 The Tasmanian devil, a wolverine-like marsupial carnivore, has been reintroduced to mainland Australia, where it has been extinct for hundreds of years. The formidable animals are not roaming free in the outback, however, but are rather confined to the “Devil Ark” in a free-range captive breeding project: “Devils are kept in densely vegetated pens of between two and three football fields in size enclosed by a climb and burrow-proof fence, and their pen mates are chosen by experts from a genetic ‘stud book’ to optimise breeding.”

With a screeching cry and the strongest bite of any animal relative to its size, the Tasmanian devil has a fearsome reputation. Although they vanished from mainland Australia after the introduction of the dingo, they were until recently quite common on Tasmania. Without human intervention, however, devils are likely to go extinct in the wild due to the rapid spread of a particular kind of facial cancer, spread by fighting. As Tasmanian devils have extremely low genetic diversity, due to a previous population bottleneck, their immune systems are unable to recognize cancer cells that spread when one of the aggressive animals bites another, as they frequently do. Numbering roughly 250,000 twenty years ago, the devil population has been reduced to the low tens of thousands.

Thus far, the program is proving successful. As recently reported in Chanelnewsasia:

They just love being here, all the signs are that they are happy and healthy devils. … Social dominance is a constant battle in the wild and Devil Ark is no different — having to share their territory with others forces the devils to fight for their food and mating rights, skills they can quickly lose in a zoo.  Those wild traits are crucial for them being able to survive when they’re re-released.

According to current plans, devils from the Ark will be reintroduced to Tasmania after the wild population dies out.