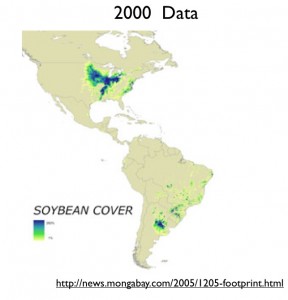 The drought in the U.S. farm-belt is having major repercussions in South America, as farmers in the region seek to take advantage of high commodity prices. As reported in BloombergBusinessweek, Argentine farmers hope to harvest as much as 31 million tons of corn (maize) in early 2013, which would smash their previous record of 22 million tons. The acreage under soybeans in Brazil, Argentina, Paraguay, and Uruguay will also expand dramatically, perhaps by as much as 30 percent, which will likely allow Brazil to surpass the United States as the world’s leading soy exporter. Soil moisture conditions over most of the South American agricultural heartland are currently good, although that could change as the southern hemisphere passes into its spring and summer growing seasons. Eight months ago, after all, the situation was revered, when Bloomberg reported that “Corn rose, capping the longest rally since August, and soybeans climbed to a one-month high as adverse weather threatens crops in South America, boosting demand for U.S. supplies.”

The South American agricultural export boom, on-going for several years, has resulted a major economic transformation over a broad area. Paraguay, for example, has emerged as the world’s sixth largest soybean producer and fourth largest exporter. The Paraguayan government is currently courting South Korea, hoping that Korean investments will allow further increases in agricultural production. Foreign companies, it stresses, can purchase farmland in the country without restriction. Paraguay is also embracing agricultural genetic engineering. According to a recent Reuters report, “Paraguay will approve Monsanto’s genetically modified Roundup Ready 2 soybean seeds before the end of this year along with new corn technology aimed at improving the country’s competitiveness as a grains exporter…”

Uruguayan agriculture, for its part, has traditionally emphasized beef, and until recently the country produced few soybeans (as can be seen on the map). But soybeans are now the country’s top export item, with the value of the crop in 2012 estimated at $1.1 billion. Yet Uruguayan beef remains extremely important. Over the past few years, the country’s beef industry has sought to capitalize on problems in neighboring Argentina, emphasizing the fact that most of its cattle herds are largely grass-fed and free of hormones. As Argentine farmers have increasingly plowed their pastures for row-crops, the Argentine beef industry has by necessity turned to the U.S.-style of grain-fed, feedlot production, which many experts think produces an inferior product. If Uruguay follows its neighbors in emphasizing corn (maize) and soy exports, its advantage in the beef market may fade.