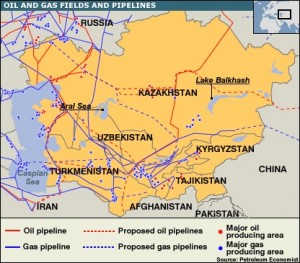 The governments of Kazakhstan and South Korea signed an investment deal this week worth US$ 7 billion, focused on petrochemicals, electric power generation, machine building, and construction. South Korea is now the top investor in Kazakhstan’s state-led industrial development program.

South Korean investment in Central Asia has been growing for some time. In the summer of 2011, South Korean president Lee Myunb-bak undertook a tour of Mongolia, Uzbekistan, and Kazakhstan. In Ulan Bator, he signed a “memorandum of understanding” with the Mongolian government focused on Korean participation in mining, the development of the electricity sector, and the building of infrastructure. In Uzbekistan, he made economic deals valued at $4.2 billion, centered on the development of the Surgil natural gas field near the remnants of the Aral Sea. It was also agreed that South Korea would transfer information technology to Uzbekistan and help modernize its stock exchange system. In Kazakhstan, Lee signed deals for South Korean firms to construct two power plants in the city of Balkhash, which will eventually supply more than 7 per cent of Kazakhstan’s electricity, and build a major petro-chemical complex near the Caspian Sea.

Critics contend that South Korea’s growing economic ties with Central Asia have some troubling political complications. South Korea recently deported several Uzbek refugees, even though it is suspected that they will be subjected to torture in Uzbekistan. According to U.S. embassy cables made public by WikiLeaks, Uzbekistan and South Korea agreed in 2006 to root out illegal Uzbek laborers in South Korea. Several thousands of workers from Uzbekistan are still believed to live in South Korea, but the number had been significantly larger in the early 2000s.

South Korean economic ties with both Uzbekistan and Kazakhstan are facilitated by the large numbers of ethnic Koreans living in those countries. As many as 200,000 Koryo-sarams—as ethnic Korean living in Central Asia are called—reside in Uzbekistan, with another 100,000 living in Kazakhstan. The Koryo-saram are the descendents of Koreans who were deported by the Soviet Union from the Russian Far East to Central Asia in the 1930s. The deportations were brutal, resulting in an estimated 40,000 deaths. Eventually, however, many of the ethnic Koreans in the region acquired high levels of education and reached positions of economic responsibility.

By 1989, the majority of the ethnic Koreans in Central Asia considered Russian to be their first language. Many members of the community, however, are trilingual to some extent, speaking Russian and Korean in addition to either Uzbek or Kazakh. Such widespread linguistic capabilities help smooth the progress of South Korean firms investing in Central Asia.