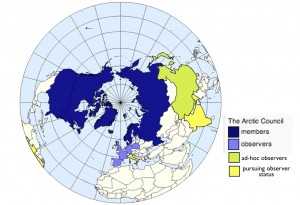 2point6billion, a China-India-ASEAN investment newsletter, reports that China, India, and Brazil are trying to gain observer status on the Arctic Council, an intergovernmental forum focused on Arctic issues, including environmental protection, economic development, and indigenous rights. The Wikipedia claims that China, along with Japan, South Korea, and Italy, already enjoys “ad-hoc observer” status on the council. According to 2point6billion, Canada and Russia are wary of non-Arctic countries gaining access to the Council, while Finland, Norway, and Denmark support expansion.  The Wikipedia reports, however, that  Norway has opposed permanent observer status for China. The newsletter article goes on to state that “Chinese authorities [have] started to contemplate the potential benefits of an ice-free Arctic,” and that the Chinese Arctic and Antarctic Administration has organized twenty-seven Antarctic expeditions since 1984, with the next one scheduled for this coming July.