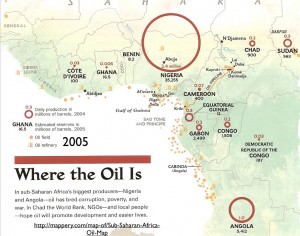 News on the Republic of Congo in the global sphere tends to be dominated by the oil industry. The country is not a huge oil producer, but it is situated in the western African oil belt, where most of the main fields are located offshore. In recent years, oil-driven economic growth has been rapid, with GDP expansion reaching almost eleven percent in 2010, but investment had been lagging. Congolese oil production has long been dominated by French and Italian companies, but that situation seems to be changing as the country seeks new investments. Bloomberg recently announced that Chevron, the second largest U.S. oil firm, would be investing $1.9 billion in Congo’s Lianzi oil field. Congo is also working with neighboring Angola, a much larger oil-producer, to develop offshore deposits. As recently reported by allAfrica:

Two accords for development and exploration of the Lianzi trans-frontier oil field, situated in the common maritime zone between Angola and Congo Brazzaville, were signed Friday in Luanda. ….The first of the deals sets the mechanisms for the sharing of revenues from the exploration of the field that will start production in 2015, whereas the second relates to the opening of a joint account for deposit of the incomes resulting from the operations.