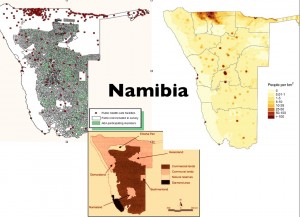 The president of Namibia recently expressed deep dissatisfaction with the slow pace of the land reform program, which aims to transfer commercial farm ownership from the country’s White minority to its indigenous majority. The Namibian program relies heavily on government-facilitated loans and is based on a “willing seller/willing buyer” framework. Such efforts have thus far resulted in the transfer of approximately 1,000 out of the country’s 4,000 commercial farms “to previously disadvantaged Namibians” (as the Wikipedia puts it).

Although pressure is mounting to increase the pace of land reform, Namibia does not want to follow the path of Zimbabwe, where forced farm transfers destroyed the country’s commercial agricultural economy. According to a recent allAfrica article, the Namibian effort is currently focused on the southern part of the county, where “hundreds of farms are lying idle.” One problem, however, is the fact that the “intended beneficiaries are reluctant to move into these farms.

The majority of Namibia’s commercial “farms” are not agricultural lands per se, but are rather vast, uncultivated pastoral holdings devoted to the raising of cattle and sheep. Most of the central and southeastern portion of Namibia is divided into such large private parcels, but most of the country’s rural population is found in the rainier far north, where subsistence agriculture is the economic mainstay.

The Namibian government is trying to encourage meat exports, hoping to bolster the commercial sector. Scandinavia is seen as a particularly promising market. As the country’s main newspaper reported on March 14, “Meat industry representatives from Sweden and Norway were scheduled to arrive in Namibia this week to discuss meat exports to those Scandinavian countries.” The article also noted that, “a visit from representatives in the meat industry from Iran is also earmarked in the near future.”