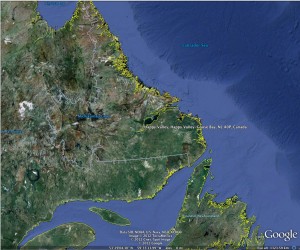 Happy Valley-Goose Bay (population 7,500) is pressing Canadian Prime Minister Stephen Harper to fulfill a campaign promise of several years ago and establish a drone squadron at the Canadian Forces Base (CFB) located in the remote community.  During the Cold War, CFB Goose Bay had been a major military facility, used heavily by NATO. In more recent years, the base has been employed by the British, German, and Italian militaries as a training facility. Currently, however, the Goose Bay’s extensive facilities are little-used, even though the Canadian government has recently spent some $20 million in upgrading the airfield and as much as $300 million in environmental clean-up. As the Wikipedia explains, “the base continues in its role as a low-level tactical training facility and as a forward deployment location for Canadian Forces Air Command, although the total complement of Canadian Forces personnel numbers less than 100.” As result of the military drawdown, the economy of Happy Valley-Goose Bay has suffered. If a drone facility is established at Goose Bay, it will be used mainly for the surveillance of Canada’s sparsely populated Arctic region.

Happy Valley-Goose Bay is situated next to an unusual geographical feature, Lake Melville. Although located well inland, sizable Lake Melville is connected to the ocean through the narrow Hamilton Inlet. Information on this water-body is difficult to find and often contradictory. The Wikipedia article on the lake describes it as a “saltwater tidal extension of Hamilton Inlet,” yet another Wikipedia article describes it as “freshwater lake Melville.” I imagine that the eastern part of the “lake” is brackish and that the western part is essentially fresh, but I have not been able to find confirmation.

Although the economy of Happy Valley-Goose Bay is depressed, that of the province in which it is located, Newfoundland and Labrador, is doing relatively well.  For many years, it was a deeply depressed province, owing largely to the collapse of the cod fishery. Offshore oil, however, has resulted in a minor boom. As summarized by the Wikipedia, “Unemployment rates decreased, the population stabilized, and saw moderate growth, and the province recorded record surpluses which rid it of its ‘have not’ status.” Recent discoveries indicate that Newfoundland may have massive shale oil deposits as well. Exploiting such resources, however, would demand fracking, and hence would be environmentally controversial.