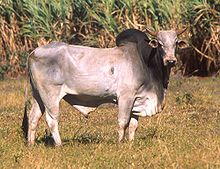 According to a recent article in The Hindu, The government of Andhra Pradesh in India has recently put all airports and seaports in the state on high alter, due to concerns about the smuggling of genetic material by organized crime syndicates. The material in question is “semen of the Ongole bull, acclaimed as one of the world’s best bovine [breeds] available.” In late February, suspicions were raised after “agents of a foreign concern made a vain bid to transport 124 Ongole bulls/bullocks by containers suspectedly to Bangladesh en route to Brazil, Switzerland etc.”

Ongole bulls have long been exported; according to the Wikipedia, “The Brahmana bull in America is an offshoot of the Ongole.” India wants more control over the process, however, and calls have been made to patent the animal’s genetic material.

The Indian website “Breeds of Livestock” provides interesting background on the development of the breed:

Before organized efforts of the colonial rule, the institution of Brahmini Bull system in the ongole area has substantially improved the breed by avoiding inferior breeding and inbreeding. It has been the custom in the area that dedicating a young bull selected by a village committee funded by village rich men or the local deity and the bull being branded at a ceremony either with Sanku, Chakra, Trisul, then becomes common property and Brahmini bull is the property of the village and covers the village herd, this is how a small farmer provided the stud services.