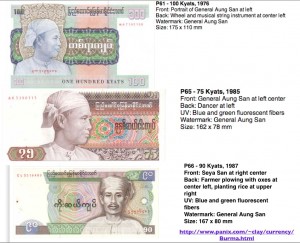 Central bank officials in Burma (Myanmar) recently announced that they would establish a reference exchange rate of 818 kyat to the dollar in turning to a “managed float currency regime.” Burma’s currency reform marks a major step its tentative transformation into a “normal country.” Prior to the currency reorganization, Burma was characterized by a gargantuan spread between official and black-market exchange rates. The kyat has long been fixed at around 6.4 to the dollar, while the actual rate obtainable on the street varied between 800 and over 1,000 kyat to the dollar. Under the new regime, however, street dealers are giving a lower exchange rate than that announced by the central bank, disappointing tourists with offers of only 780 kyat to the dollar.

International investors are eager to enter the Burmese market, but many obstacles remain in place. Experts expect that it will take several years before Burma’s financial system operates in accordance with global norms. According to a recent article in the Wall Street Journal, foreign investors will probably have to wait until at least 2015 for Burma to ease its restrictions on foreign capital. Burma is keen to attract investment, however, as seeks to enhance its export capabilities. Its government recently announced that it is seeking to boost rice exports by twenty percent in the coming fiscal year.

Currency manipulations resulted in major problems in Burma in the 1980s. In 1985, its government abruptly demonetized its 25-, 50-, and 100-kyat notes, introducing instead 15-, 35-, and 75-kyat notes; although a limited number of old bills were allowed to be traded in for the new ones, many people lost their money in the process. According to most reports, the new denominations were selected according to numerological considerations. Two years later, the 25-, 35-, and 75-kyat notes were in turn demonetized, this time with no compensation. New 45- and 90-kyat banknotes were again devised on numerological grounds. The massive loss of money led to the so-called 8888 Uprising, which in turn resulted in the military coup d’état of 1988.