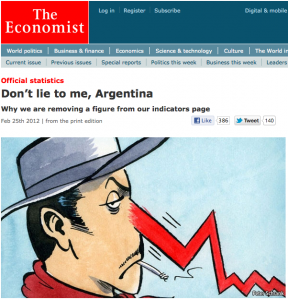 Economic pressures and uncertainties are again mounting in Argentina. Moody’s recently downgraded the country’s credit rating, and on September 24 the International Monetary Fund threatened it with sanctions if it does not produce “acceptable” economic data by December. The Argentine government has been accused for the past year of manipulating its economic reports to hide its true rate of inflation. According to its most recent report, annual inflation is running at about 10 percent, whereas independent sources peg it closer to 24 percent. Economic growth in Argentina has slowed down greatly this year, although the central government still expects it to come in at a respectable 3.4 percent for the calendar year. Outside observers, however, doubt that the figure will be reached. Optimists note that Argentina’s trade surplus is strong and growing rapidly, but their opponents counter that this trend stems largely from the government’s restrictions on imports, which have angered key trading partners.

As a result of Argentina’s economic difficulties, the value of its peso has been dropping against other currencies. As Bloomberg reported at the end of August, “In Argentina’s unregulated exchange market, in which investors buy assets locally in pesos and sell them abroad for dollars, the peso has slid 27 percent this year to 6.5247 per dollar.” As a result of the peso slide, Colombia is now reporting that it has surpassed Argentina to become the second largest economy in South America in terms of nominal GDP.

Despite the looming financial problems, Argentine president Cristina Fernández de Kirchner remains unbowed. She notes that the country’s economy boomed after it ignored conventional thinking and defaulted on its bonds after its last economic crisis roughly a decade ago. Argentine prosperity, she contends, demands a degree of autonomy from the global economic system. As she recently argued, “the rich countries don’t want partners or friends; they just want employees and subordinates. And we’re not going to be anybody’s employees or subordinates. We are a free country, with dignity and national pride.”

In a recent Seeking Alpha post, Ulysses de la Torre paints a truly dire picture of the Argentine economy. The following assertions are plucked out of his column verbatim. To the extent that they are true, an impending collapse seems possible:

It is now almost impossible to buy dollars… This difficulty in obtaining foreign exchange has resulted in a de-facto travel ban… Neither domestic nor foreign tourists are traveling south, the former because they are too poor, the latter because it is too expensive at the official exchange rate, spelling economic disaster for the tourism sector… There is a one month waiting list to buy non-domestic light bulbs, which are smuggled in from Chile. Bizarrely, they are cheaper now than previously, when they could be legally imported… Smuggling a laptop into the country could earn enough to just about cover the cost of a flight to the United States… Credit from banks at interest rates considered reasonable by any conventional standard does not exist… The real estate market has effectively ceased functioning since no one is selling and no one buying… Social unrest, protests and crime are all increasing, and there are waiting lists of up to one month to buy burglar alarms. Violent crime is also increasing, which is otherwise relatively unheard of in the provinces.. Power cuts are becoming extremely common and coping with the upcoming summer will become more difficult.