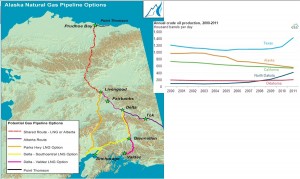 Alaskan newspapers recently announced that their state had just been surpassed by North Dakota as the second largest oil producer in the United States (after Texas). The announcement sparked discussions about why Alaska’s production is falling while that of North Dakota is booming. Whatever the reasons, the geographical transformation of the U.S. oil industry over the past few years has been pronounced, occurring too rapidly to be noted by many top reference sources. Wiki Answers, for example, still claims that the top oil-producing states are “Alaska, Oklahoma, California, Texas, and Louisiana,” without even mentioning North Dakota. As can be seen in the graph, as recently as one year ago the oil output of both Alaska and California exceeded that of North Dakota.

Although Alaska’s oil production will likely continue to decline, natural gas may be a different matter. Large quantities of gas are derived from oil drilling in the North Slope (the Arctic coastal region), but as bringing the gas to market is currently impossible, it is simply injected back into the oil deposits. Recently, however, the Alaskan legislature voted in favor of building a pipeline to transport natural gas from the North Slope to the southern part of the state. This controversial project will have to clear additional hurdles, but events elsewhere in the world have increased the likelihood of its eventual approval.

The signal event in question is Japan’s shutdown of its entire nuclear power industry. Without the use of its nuclear power plants, Japan has been forced to quickly increase its energy imports. Small quantities of natural gas from southern Alaska have long been liquefied and shipped to Japan; the current plan is to vastly expand this trade by tapping North Slope supplies. As Olga Belogolova, writing for the Homer Tribune, explains:

Alaska needs Japan as much as Japan needs natural gas. No pipeline transports gas from Alaska to the lower 48, and the economics—near-record-low prices for gas combined with the shale boom across the country—don’t support building one. … Meanwhile, profits are far higher in Asia than in Europe and the United States. Asian LNG prices hover around $14 to $16 per million British thermal units, while the U.S. surplus has brought domestic prices down to $2 to $3 per MBtu. This stark disparity means that no viable market for Alaska’s gas exists in the rest of the U.S., but the Japanese government is the perfect customer, because it badly needs the fuel and is willing to pay above the market price.

Alaska is by no means the only place seeking to capitalize on Japan’s surging energy demand. Huge gas deposits are also found in the delta of the Mackenzie River in far northwestern Canada; here as well a massive pipeline project has long been on hold, due mainly to environmental concerns. But as Reuters recently reported:

The native-owned corporation that would control a third of a long-delayed gas pipeline in Canada’s Far North is open to discussing the idea of a liquefied natural gas project that would allow reserves to be shipped to Asia to kickstart development.

Similar processes are also occurring elsewhere in the world. Reuters is also reporting that:

Western companies announced finds of huge additional quantities of gas off the coast of Mozambique and Tanzania, cementing the future of East Africa as a major new supplier exporting liquefied natural gas (LNG) to energy-hungry Asia.