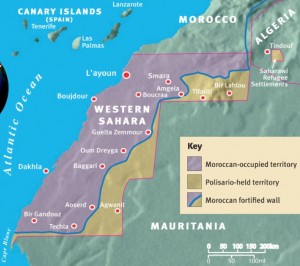 Yet again, talks on Moroccan-occupied Western Sahara collapsed without agreement. Representatives from Morocco, the independence-seeking Polisario Front, Algeria, and Mauritania recently met for three days in a suburb of New York; in the end, “‘Each party continued to reject the proposal of the other as the sole basis for future negotiations, while reiterating their willingness to work together to reach a solution.” Representatives from same groups will convene again in Europe in June. As the conflict has essentially been stalled since the Moroccan annexation of the former Spanish colony in 1975, little is expected.

The Western Sahara conflict generates diplomatic complications for the United States. Although the U.S. seeks good relations with Morocco, it is concerned about Western Sahara. A pending Foreign Operations and Related Programs Appropriations Act (S.1601), would have the U.S. withhold some scheduled military assistance for Morocco until the Secretary of State “submits a report on steps taken by the government of Morocco to respect the rights of individuals to peacefully express their opinions regarding the status and future of the Western Sahara, and to provide unimpeded access to human-rights organizations, journalists and representatives of foreign governments to the Western Sahara.” The Moroccan foreign minister Saad Eddine Othmani reportedly views the bill as “an unfair judgment about his country — and a simplistic approach to a highly complicated issue.” GovTrack.us, however, claims that this complex bill has only an eight percent chance of being signed into law.

Meanwhile, NGOs and humans rights organizations have criticized the recent decision of the German company Siemens to build and maintain a number of electricity-producing windmills in Western Sahara. The wind farm is scheduled to become commercially operational in the summer of 2013. According to a March 21 article in Newstime Africa, “The problem is that, according to international law, it is illegal to trade or dispose of resources in occupied Western Sahara without the consent of Western Sahara’s indigenous population, the Saharawis, who also have to benefit from any such dealings.”

Kidnappings have recently turned up the pressure in Western Sahara. Two Spanish and one Italian aid workers were recently kidnapped in Tindouf, the Algerian refugee camp that also serves as the seat of the government-in-exile of the dispossessed Saharawi people.  The abduction was evidently carried out by an al-Qaeda splinter group that calls itself the “Movement for Oneness and Jihad in West Africa,” which is demanding $37 million (30 million Euros) to free the three aid workers.