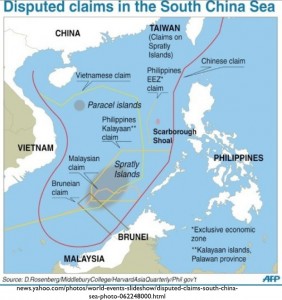 The headline of an April 15 article in the Washington Post might strike many readers as slightly absurd: “Philippine president says his country won’t start war with China over disputed shoal.” Although the Philippines is hardly in a position to challenge China militarily, the remarks of President Benigno Aquino III did help the country save face as it pulled a warship out of the disputed waters and allowed several Chinese fishing vessels to return home with their catch. On April 16, the United States and the Philippines began joint military exercises, a move that officials insist has no connection with the China-Philippine dispute.

The disputed territory in question is Scarborough Shoal (called Huangyan Island in China and Panatag Shoal in the Philippines.) It is situated well to the northeast of the better-known Spratly Islands, which are often considered to entail the world’s most complex territorial contest, with multiple overlapping claims. Despite the fact that Scarborough is labeled as a mere shoal or reef, it actually contains a significant amount of dry land, estimated at 50 square kilometers (58 sq mi). It is, however, highly rocky and of little use. The local seas, however, are rich marine resources, and a successful territorial bid would give the controlling country power over an expansive maritime domain.

The dispute in the Spratly Islands is intensified by the possibility of substantial oil and natural gas deposits in the area. The most interesting recent maneuver in this contest occurred in March 2012, when Vietnam sent six Buddhist monks to re-establish an abandoned temple that the country had briefly maintained in the 1970s on one of the islands. The presence of the monks will supposedly help Vietnam establish its territorial claims in the region. One of the monks claimed that he would “pray for ‘anyone of the Vietnamese race’ lost at sea in defence of Vietnam’s claim to the archipelago.’”