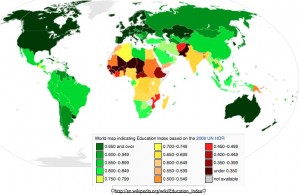 The Korea Herald announced last week that South Korean Universities would be reducing their tuition by an average of 4.5 percent. Almost all schools cut their fees, some by more than 20 percent. The move was in response to a series of well-organized student protests over the mounting costs of higher education, which were particularly intense last summer. Fee cuts are possible because the South Korean government “set aside 1.75 trillion won for tuition support in 2012 as part of its move to help relax tuition burdens.” Most universities in South Korea rely extensively on such fees, although, at an average level of US$ 8,000, they remain low by U.S. standards.

South Korea has one of the world’s most rigorous educational systems. The desire for a university education is intense, and the competition to get into the best schools can be overwhelming. Political leaders in the country have recently claimed that too many Korean students are opting to pursue higher education. According to the Chronicle of Higher Education, President Lee Myung-bak claimed last autumn that, “Reckless entrance into college is bringing huge losses to families and the country alike.” The same article adding that, “Mr. Lee has raised eyebrows, and hackles, by suggesting that fewer people should go to college from a population of 50 million that sustains 3.8 million undergraduate and graduate students.”