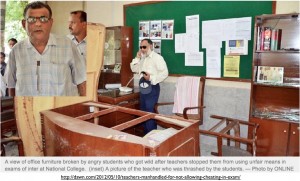 Geography classrooms are not normally associated with violence, but that is not necessarily the case in Pakistan. Just this week, classrooms at Government National College in Karachi were ransacked and several teachers were beaten after they refused to allow students to cheat at the annual examination of a course on commercial geography. According to Dawn, Pakistan’s premier English-language newspaper, the assault was perpetuated by “political groups of outsiders.” As a result of the attack, teachers at the college organized a boycott of exam-grading duties, complaining that the institution’s officials had not taken adequate precautions to prevent violence. The Sindh Professors and Lecturers’ Association “said that it was the failure on part of the college directorate and the law-enforcement agencies that unscrupulous elements had now started demanding cheating facilities so openly and were giving threats to the lives of teachers and other college staffs.”

Cheating on examinations in Pakistan is so prevalent that it has inspired a minor YouTube genre. One recent video recounts the story of a school headmaster being “beaten by an influential feudal lord for not allowing students to cheat during matriculation examination.”