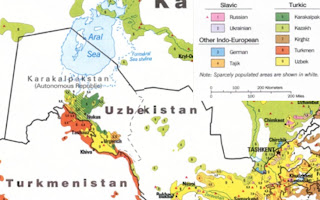 The destruction of the Aral Sea has disproportionally hit one ethnic group, the Karakalpak, a people roughly half a million strong whose name means “black hats.” The Karakalpak homeland is the region where the Amu Darya River once flowed into the Aral Sea. The Karakalpak traditionally farmed the fertile delta soils, fished in the river channels and the vast lake, and pastured cattle in the formerly extensive marshlands. Today the fisheries are gone and farming and herding suffer from the toxic dust clouds blowing from the dry Aral seabed. Anemia, respiratory diseases, and other diseases are ubiquitous; according to some accounts, Karakalpakstan has the worst public health figures of the former Soviet Union. It is hardly surprising that a separatist group, known as the Free Karakalpakstan National Revival Party, has arisen in the region. This small organization accuses the government of Uzbekistan of waging a genocidal campaign against the Karakalpak people. 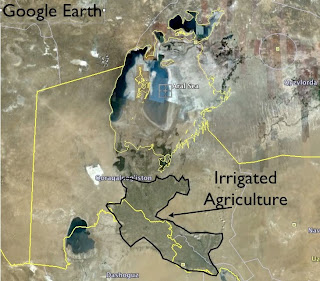 The lower Amu Darya forms a sizable area of irrigated agriculture and relatively dense population. It is an ethnically mixed area, inhabited by Turkmens and Uzbeks as well as Karakalpaks (see map). The Karakalpak language is closely related to Kazakh, lacking the Persian influence found in Uzbek. Some Kazakh nationalists claim that the Karakalpak were merely a subgroup of the Kazakhs who were granted their own ethnic status by Soviet authorities eager to divide and rule. But if language did not strongly differentiate the two groups, mode of life did; whereas the Kazakhs traditionally practiced pastoralism on the open steppe, the Karakalpaks farmed, fished, and herded in a wetland environment. Under the Soviet nationalities policy, the Karakalpaks were granted their own “autonomous republic” within the Union Republic of Uzbekistan. The collapse of the Soviet Union in 1991 did not substantially change this arrangement, as Karakalpakstan remains an “autonomous republic” – albeit with little real autonomy – within Uzbekistan. 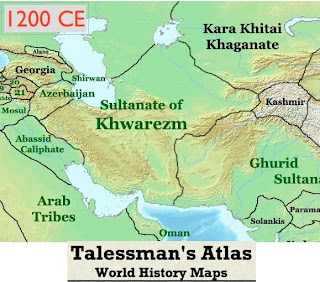 Although the Karakalpak language shows little Persian influence, the lower Amu Darya was once a key part of the greater Persian cultural region. Prior to the 14th century, the large oasis region of the lower Amu Darya, called Khwarezm, had its own Iranian language, Khwarezmian. Around the year 1200, Khwarezm was the seat of a large if short-lived empire. Its downfall seems to have come at the hands of two brutal conquerors, Genghis Khan and Timur (Tamerlane). Timur viewed the region as a rival to his own power-center at Samarkand; through five campaigns in the late 1300s, he systematically destroyed its cities and irrigation networks. During this chaotic period, the Turkic languages of the pastoralists spread, eventually replacing the original Iranian tongue. Khwarezm gradually recovered political and economic power, although never to its former extent. Its last state, the Khanate of Khiva, was subdued by the Russian Empire in 1873. It lingered on as a Russian protectorate until its final dissolution in 1920; in 1924, Khiva was formally annexed by the Soviet Union.

In its heyday, the lower Amu Darya was a major cultural and intellectual center. Its former significance is reflected in the world “algorithm,” which derives indirectly from Khwarezm by way of the Latin translation of “al-Khwārizmī,” the ninth century founder of algebra. Although al-Khwārizmī’s name indicates that he hailed from the region, he gained fame in Baghdad. Two other scholars of equal renown were more closely associated with Khwarezm. Ibn Sīnā (Avicenna, c. 980 – 1037), the leading philosopher and physician of his age, taught for a while in the lower Amu Darya, where the local vizier supported an impressive assemblage of scholars. His contemporary, al-Biruni (973-1048), was born and educated in the region. Al-Biruni’s first language was Khwarezmian, but he wrote in Persian and Arabic—and was conversant in Greek, Syriac, and Sanskrit. Noted for his work in astronomy, chemistry, geography, mathematics, geology, medicine, physics, and history, al-Biruni’s greatest accomplishment was perhaps his pioneering work in what we would today call area studies. He traveled to northern India to sit at the feet of local scholars, learning not just their language, but their cultural mores, religious ideas, and scientific and mathematical systems. He wrote about Indian culture with respect, striving to convince his fellow Muslims that Hindus belonged to a sophisticated and ancient civilization. If asked to name the greatest scholar of all time, I would have to nominate a son of Khwarezm, Abu Raihan Mohammad Ibn Ahmad al-Biruni.