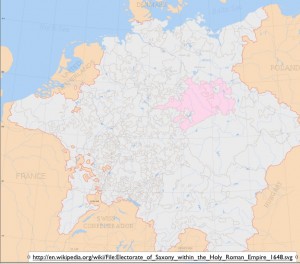 Most current-day mapping of central Europe during the early modern period (1500-1800) emphasizes the division of the so-called Holy Roman Empire into its constituent states. Detailed maps, readily available online, delineate every kingdom, duchy, principality, imperial city, and politically independent archbishopric and bishopric within the empire, as is evident in the impressive Wikipedia map locating the Electorate of Saxony posted here. In this portrayal, the so-called imperial states are depicted as units of the same type, existing at the same level of the political hierarchy, regardless of size and significance. In one sense, such a view is appropriate, capturing an important aspect of the constitutional order of the Holy Roman Empire. Regardless of their size, the polities depicted on the map enjoyed “imperial immediacy,” which meant that they fell “under the direct authority of the Holy Roman Emperor and the Imperial Diet (Reichstag), without any intermediate liege lord(s).” As neither the emperor nor the diet actually held much authority, such states and statelets can be understood to have possessed what the Wikipedia calls a “form of sovereignty.”

But if the various imperial states of the Holy Roman Empire had sovereignty of a sort, they did not possess the full political autonomy that “sovereignty” now generally denotes. Nor were they conceptualized at the time as equivalent units. Archdukes and their archduchies outranked dukes and their duchies, just as the latter outclassed counts and their counties; hierarchy was intrinsic to the system. In the Imperial Diet itself, moreover, different kinds of states were weighed differently. The imperial free cities, for example, had only an advisory role in the Reichstag, while many minor counts and prelates were grouped together in “colleges” that had only a single vote. 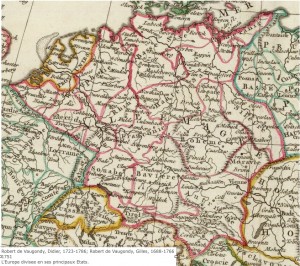 In the geographical imagination of the time, the minor states of the empire were of even less account. In the vast majority of maps produced during the early modern period, no effort was made to depict the quasi-sovereign subsidiary states of the Holy Roman Empire. Most were considered too small to be of significance, and—as explained previously—sovereignty per se was not the main criteria for mapping. Instead, the empire was usually subdivided into a dozen or so regional aggregations, as can be seen in the detail of the Vaugondy map of 1751, posted here. Vaugondy included a few of the Empire’s constituent states, such as the Kingdom of Bohemia, but otherwise his map bears no resemblance to our standard reconstruction of the political geography of early modern Germany. Several of Vaugondy’s regions seem odd to the modern eye, especially his Upper Saxony (Haute Saxe), which included two major states (the Electorate of Saxony in the south and the Electorate of Brandenburg in the north) as well as a number of minor ones. In the modern historical conception, “Upper Saxony” is limited to the “electorate” of the same name, never extending into Brandenburg, which was then linked to Prussia.

Vaugondy’s depiction of Upper Saxony, however, was typical of the time. It was also rooted in the geopolitical structure of the Empire. Like most produced in the eighteenth century, his map referenced an overlapping system of division, the so-called Imperial Circles. These spatial groupings were supposedly organized for defense and taxation, although their powers were marginal. They also had their own Diets, or Kreistags. Not all of the empire, however, was so “encircled.” Some of its smallest divisions remained outside the system, as did some of its largest, including Bohemia—by law the Empire’s only kingdom.* Moreover, As the Wikipedia map posted here shows, the circles were themselves fragmented (intricately so in the case of the Electoral Rhenish Circle). In a word, the Imperial Circles essentially reproduced the decentralized structure of the empire as a whole at the regional scale. 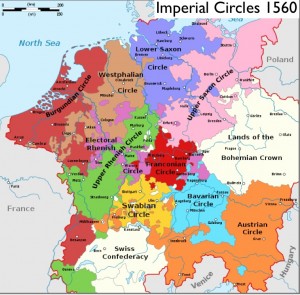 Most early modern cartographers had little interest in mapping such spatial “monstrosities” (as Goethe famously characterized the Holy Roman Empire itself), seeking instead to outline regions with more immediacy in the popular imagination. Vaugondy’s own map of the Holy Roman Empire was only loosely based on its division into imperial circles. Even where the place-names lined up, he made no effort to precisely portray the circles, basing his own bounded units only roughly on their territorial forms. Moreover, several of the areas that he delineated, such as Pomerania, were historically constituted regions with no specific imperial status. A handful of enlightenment geographers, to be sure, did depict the Imperial Circles, as can be seen in the Homann map of 1740. But most produced hybrid images, as in John Cary’s map of “the Circle of Upper Saxony with the Duchy of Silesia and Lusatia.” 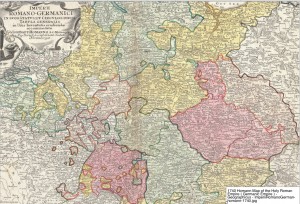 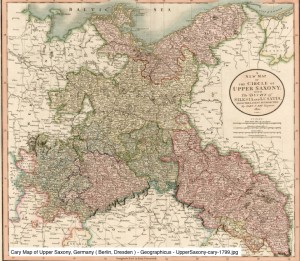 * During this period, however, the King of Bohemia was the Hapsburg Emperor himself, whose forbears had accumulated a string of possessions and hence titles. Prussia was also, after 1701, styled a “kingdom”—of sorts—but that was possible only because its eastern segment (a Duchy!) lay outside of the boundaries of the Empire. Until 1772, moreover, the monarch had had to call himself “King in Prussia,” rather than the “King of Prussia” in order to maintain appearances. Before 1657, the Duchy of Prussia was held in vassalage from the Kingdom of Poland; in Vaugondy’s map, this section of Prussia is still mapped as part of Poland.