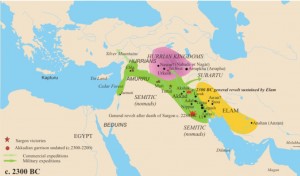 The Caucasus is rightly called a “mountain of languages.” Linguistic diversity reaches its extreme in the Russian republic of Dagestan and adjacent districts in northern Azerbaijan. The nearly three million inhabitants of Dagestan speak more than thirty languages, most of them limited to the republic. Such languages may seem inconsequential to outsiders, mere relict tongues of minor peoples. Yet a few of them are of historical significance, and the broader linguistic geography of the region provides evidence of important historical patterns stretching back for thousands of years. Historical linguistic relationships here are also implicated in the current-day political struggles of this troubled region.

Although the languages of Dagestan include members of the widespread Turkic and Indo-European families, most belong to the Northeastern Caucasus family. Many linguists include the Nakh languages of neighboring Chechnya and Ingushetia in the group; others essentially limit it to languages spoken in Dagestan and the mountains of northern Azerbaijan. Despite its restricted distribution, the NE Caucasian family is deeply differentiated, including six clearly separate subfamilies in addition to Nakh. Three of these groupings (Lezgic, Dargin, and Avar-Andic) include one or two “major” languages, spoken by hundreds of thousands of people, along with an assortment of local tongues used by only a few thousand. According to the Wikipedia, four Dagestani languages (Avar, Dargwa, Lezgin, and Tabasaran) are “literary,” employed to some extent for written communication.

As a remote area with many small ethnolinguistic groups, the northeastern Caucasus is distinctive but hardly unique. Other areas of forbidding topography with similar levels of linguistic diversity include the highlands of New Guinea—a vastly larger area—and the Nuba Mountains of Sudan. Most such areas are assumed to be historical backwaters, but that is not the case in regard to the northeastern Caucasus. If the “Alarodian” hypothesis is correct, two of the most important  peoples of the ancient Near East spoke languages, now long extinct, that were closely linked to the Northeastern Caucasian family.

The ancient languages in question are Hurrian and Urartian. “Hurrian” may not be a household word, but various Hurrian states were rivals of the Babylonians, the Hittites, and other Bronze-Age “super-powers.” The Hittite Empire itself probably included large numbers of Hurrian-speakers, although its official language was Indo-European. The main body of the Hurrians, living in what is now northern Iraq, northeastern Syria, and southeastern Turkey, also seems to have been over-run by Indo-Europeans, chariot-riders who established the powerful Kingdom of Mittani circa 1500 BCE. The Mitanni rulers had Indo-European names, but they soon adopted the Hurrian speech of their subjects, as revealed by the remarkable Amarna Correspondences preserved in Egypt. 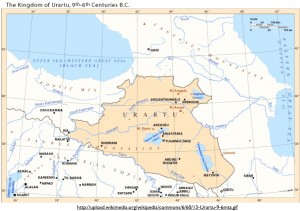 The Mitanni Kingdom of the Hurrians disappeared in the conflagration that marked the end of the Bronze Age, circa 1200 BCE, a time of massive population movement, de-urbanization, and the retreat of literacy. By the tenth century BCE, however, a powerful new kingdom using a closely related language emerged in the area around Lake Van in what is now eastern Turkey. This Iron-Age kingdom of Urartu was noted for its mineral wealth and for its bitter rivalry with the Assyrian Empire. Urartu persisted until it was conquered by the Empire of the Medes, the immediate predecessor of the Persian Empire, circa 590 BCE. At roughly the same time, the land of Urartu seems to have been linguistically transformed by the spread of proto-Armenians from the west, a people perhaps linked with the ancient Phrygians who spoke a language in an outlying branch of the Indo-European family. In the twentieth century, Armenian nationalists began to glorify ancient Urartu as the deep font of Armenian culture. In doing so, they sought to highlight the antiquity of their claims to territory in what is now eastern Turkey. Without endorsing such political claims, it is only fair to acknowledge a close historical connection between Urartu and Armenia. 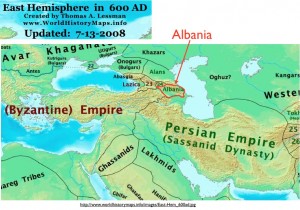 The linkage between NE Caucasian languages and ancient kingdoms is strongest in Caucasian Albania, a state that covered much of what is now Azerbaijan from the fourth century BCE to the eighth century CE. Like Armenia and the Georgian kingdom of Iberia, Albania was politically caught between, and deeply influenced by, the Persian world to its east and the Greco-Roman world to its west. We know from ancient Greek writers that the Albanians eventually acquired their own script, but knowledge of this writing system was lost until 1937. At that time, a Georgian scholar discovered a reproduction of the Albanian alphabet in a medieval Armenian manuscript. Subsequently, a few stone inscriptions were found that used the same script, but the language itself basically remained a mystery until the early 2000s. 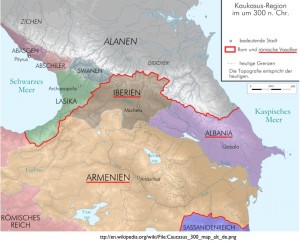 The story of the recovery of Albanian writing begins in 1975, when a fire damaged a number of manuscripts in a neglected basement cell in the famous Eastern Orthodox monastery of Saint Catherine’s in Egypt’s Sinai Peninsula. The heating of the manuscripts helped reveal the fact that some were palimpsests, parchment manuscripts that had been scraped over and then re-inscribed. Fifteen years later, unknown letters were noticed under a Georgian text in one of the documents. In 1996, the Georgian scholar Zaza Alexidze determined that the underlying passages were in Albanian. After several years of concerted effort, he recovered and translated the entire hidden layer of the palimpsest. What he found was an Albanian Christian lectionary, a church calendar with specific scriptural readings keyed to specific dates. Some scholars believe that this long-forgotten and thoroughly erased text, which dates to the late forth or early fifth century, is the oldest Christian lectionary in existence. 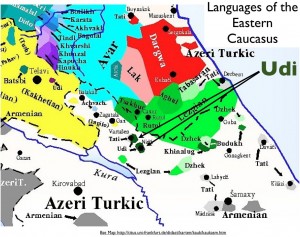 Alexidze’s translation was facilitated by the existence of a living tongue strikingly similar to the language used in the lectionary. The literary language of the ancient Albanians, it turns out, lived on among the Udi, a group of eight thousand persons inhabiting two villages in Azerbaijan. As the years passed, the Udi language diverged from old Albanian, but not by much. The surviving Udi people also retained the faith of their ancestors. Although they live in a largely Muslim area, the modern Udi belong to their own Udi-Albanian Christian church.

Christianity originally spread to Albania from Armenia. The Albanian church eventually separated from the Armenian, affiliating instead with the Orthodox Christianity of the Greek world. After the Muslim conquest of Albania in the 600s, such an affiliation became politically fraught, as the Greek-speaking Byzantine Empire was the main principal rival of the Muslim Caliphate. As a result, the Albanian Christian population was again placed under the ecclesiastical authority of the Armenian Apostolic Church. Over time, it seems, much or perhaps most of the Albanian population assimilated into the Armenian community. Those who resisted Armenian religious control seem to have evolved into the modern Udi. Yet the Udi population continued to decline, as many members adopted Islam and were absorbed by the Azeri community. Today, the Udi language is regarded as gravely endangered.

As might be expected, the Albanian heritage of the eastern Caucasus has generated a contemporary political controversy among Armenian and Azerbaijani partisans, focusing on the disputed territory of Nagorno-Karabakh. Eastern Armenians, according to some Azerbaijani stalwarts, are not so much genuine Armenians as transformed Albanians—like much of the Azeri population. Armenian scholars charge Azerbaijani historians with greatly exaggerating the extent of Albanian assimilation, and with trying to “de-Armenianize” much of the historically constituted Armenian region.

To the neutral bystander, the issue might seem moot; ethnic groups and nations often expand by assimilation, and the mixing of peoples is more the norm than the exception over the long term. Primordialist nationalism, however, retains a strong hold on the imagination, especially when faced with intractable military conflicts. As the “frozen war” between Armenia and Azerbaijani is now going into its third decade, it is not surprising that the ancient Albanians would be recruited into the conflict.