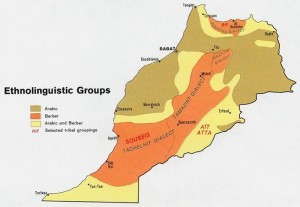 In his April 13, 2011 column in the New York Times, Thomas L. Friedman argues that the recent uprisings in the Arab world will probably not lead to the kind of mass democratization that occurred in eastern and central Europe after 1989. Although I must agree with Friedman’s basic thesis, I reject his reasoning, which is both simplistic and geographically misinformed. Owing to the influential nature of Friedman’s work, I fear that his interpretation will muddy rather than clarify the public understanding of contemporary Middle Eastern politics.

Friedman’s argument rests on the idea of the unified nation-state, which he finds lacking in the Arabic-speaking realm but well-established across Europe. As he puts it:

In Europe virtually every state was like Germany, a homogeneous nation, except Yugoslavia. The Arab world is exactly the opposite. … In the Arab world almost all of these countries are Yugoslavia-like assemblages of ethnic, religious, and tribal groups put together by colonial powers—except Egypt, Tunisia, and Morocco, which have big, homogeneous majorities.

Friedman is correct in noting that most Arab countries were artificially created by colonial powers and hence lack the deep national bonds that characterize genuine nation-states. I also agree that Tunisia and Egypt are exceptions to this rule, although Egypt’s unity is potentially compromised by the chasm separating its Muslim majority from its substantial Christian minority. Morocco, however, does not fit into this category whatsoever, as it is deeply divided between its dominant Arabic-speaking population in the lowlands and its Berber-speaking peoples of the highlands. Admittedly, Morocco does derive some sense of unity from its heritage as an indigenous kingdom. But so too does Oman, an Arab state that Friedman ignores, but which has a more homogeneous population than Morocco. Oman is divided between its dominant Ibadi Muslim population and its Sunni Muslim minority, but that gap is not nearly as wide as the one separating Arabs and Berbers in Morocco.

Friedman is equally misinformed when it comes to Europe. Most of the former Communist countries of the region had significant ethnic divisions in the 1980s, and many still do. The split between Czechs and Slovaks in Czechoslovakia was large enough to break the country apart, albeit in a peaceful manner. Slovakia, moreover, still has a large Hungarian minority, as well as a vocal and politically significant anti-Hungarian, hard-core Slovak nationalist movement. Romania also has a large Hungarian minority, and is still troubled by Romanian-Hungarian tensions. At the time of its revolution, it also had a sizable German population, but most Romanian Germans decamped for Germany after democratization. Hungary’s minority groups are not as large, but far-right Hungarian politicians constantly remind the country’s voters that a third of the Hungarian-speaking population ended up outside of Hungary’s truncated boundaries. Bulgaria has a substantial Turkic-speaking Muslim population, as well as a Bulgarian-speaking Muslim population (the Pomaks); Bulgarian Muslims, moreover, were much more numerous before the expulsions and “Bulgarianization” programs of the 1980s. The Baltic states, especially Estonia, have large Russian minorities, which are often seen as threatening national unity. Albania is divided between the Gheg- and the Tosk-speaking dialect group, and is historically rent by tribalism. And throughout the region, and particularly in Romania and Bulgaria, large Romany (Gypsy) populations remain marginalized, largely outside of the national communities.

It is tempting to wash away such diversity in order to give easy and popular explanations of large-scale social and political processes. But in doing so, we only delude ourselves, doing injustice to the complex world that we all inhabit.