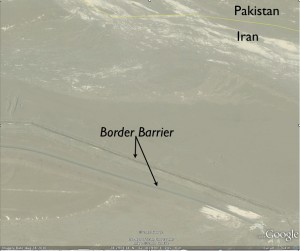 One of the world’s most heavily fortified borders stretches between Iran and Pakistan. The Iran-Pakistan Barrier, currently under construction by the Iranian government, features a three-foot thick (.91 meters), ten-foot high (3.05 meter) concrete wall extending across 700 kilometers of forbidding desert terrain. The actual wall, however, is merely one part of an elaborate system of barriers. Exploration via Google Earth reveals several parallel structures running along much of the border, which evidently consist of linked embankments and ditches. Fortress-like structures are also visible in several areas, as are extensive road and track networks. As the walls, berms, dry moats, and other fortifications are all built on the Iranian side of the border, Pakistan has voiced no objections to the project. Tracing the barrier on Google Earth, however, shows several places in which it seemingly crosses the divide between the two countries. Either Iran has encroached on Pakistani territory or—as is vastly more likely—Google Earth does not accurately depict the actual boundary between the two states. 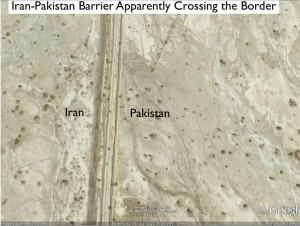 The official purpose of the Iran-Pakistan Barrier is two-fold: to stop illegal border crossings and to reduce the flow of illegal drugs into Iran. The latter issue is certainly serious. According to a 2005 United Nations report, Iran has the world’s highest rate of opiate addiction by a substantial margin, with an estimated four million regular users in a population of roughly seventy-three million. Afghanistan is the ultimate source of narcotics entering Iran, but Afghan opium is often processed in, and exported from, Pakistan. As there is only one legal crossing between the two countries, at the small oasis town of Taftan, the Iranian government hopes to gain control over the flow of goods by hardening the frontier. But despite both the barricades and the elaborate Taftan portal, a large amount of contraband evidently gets through; the two-sentence Wikipedia article on Taftan claims that it is “famed by locals as the ‘road to London’ because it is a famous smuggling route.”* 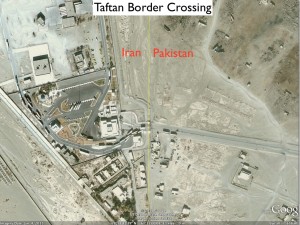 The issue of illegal border-crossing by Pakistanis is more complicated. Iran is a much more prosperous and less densely populated country than Pakistan, circumstances that often result in a large flow of surreptitious immigrants. And indeed, the westward movement of undocumented migrants is substantial. It is also apparently increasing, despite the barrier. But most of the people illegally crossing the border evidently aim to pass through Iran on their way to Europe, a region with substantially higher wages and benefits. As recently reported in Pakistan’s Express Tribune:

Iranian border security forces have handed over 2,666 illegal immigrants to Pakistani officials during the past four months. More than a thousand of these however are Afghan nationals. These fresh figures point out the worsening situation with regards to human trafficking. Last year, Iranian forces handed over 8,732 illegal immigrants to Pakistani officials at the Taftan border, a township on the Pakistan-Iran border. “High-profile people are involved in this lucrative business. Agents backed by powerful elements make false claims about economic opportunities in Europe in order to attract the youth,” Balochistan Home Secretary Akbar Hussain Durrani said. 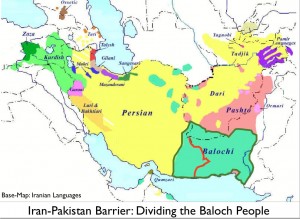 Map of Baloch People and the Iran-Pakistan Border

The illegal movement of drugs and people, however, does not seem to be the main reason for the construction of the extraordinarily expensive barrier by the cash-strapped Iranian state. More important is the desire to quell the Baloch rebellion. As can be seen on the map, the boundary between Iran and Pakistan also divides the land of the Baloch people, a distinct ethno-linguistic group some nine million strong. The bulk of the Baloch, a Sunni Muslim people, live in Pakistan, but as many as a million and a half reside in southeastern Iran, with another half million or so in southwestern Afghanistan. The Baloch in Pakistan have been engaged in a low-intensity insurgency for decades, while those of Iran have become increasingly restive in recent years. In 2003, Iranian Baloch militants formed a violent organization called Jundullah (“Soldiers of God”), dedicated to fighting on behalf of Sunni Muslims against the Shi’ite regime of Iran. Iran has long classified Jundullah as a terrorist group; in October 2010 the United States agreed, adding the organization to its official list of foreign terrorist organizations.

Considering the fact that the governments of both Iran and Pakistan are threatened by Baloch insurgents, it is hardly surprising that Pakistan has voiced no objections to the barrier. Prohibiting the free movement of militants may benefit both countries, but it also harms local civilians. In 2007, a prominent Baloch leader denounced the wall “as a blatant endeavor to divide the Baloch nation on either side of Pak-Iran border.” Local economic consequences could also be severe, as many Baloch are nomadic pastoralists, roving over large distances with flocks of sheep, goats, and other animals. The barricade prevents such movement along its extent, placing additional pressures on the hard-pressed people of the region.

The Baluchistan dispute is a complex, multi-sided issue that deserves more extensive consideration. Before delving further, however, it would be worthwhile to examine the most recent change in international borders. As we shall see in tomorrow’s post, Denmark has just announced that it will reestablish border controls, thus threatening the Schengen area of free travel among most European countries. As a result, the GeoCurrents map published just two days ago is already becoming obsolete.

* Pakistan, by the way, is concerned about drug-smuggling from Iran, but of a different kind: alcohol. On April 26, 2011, Pakistani agents seized 2,586 bottles of liquor and beer in “the Kumb area of Balochistan near the Pak-Iran Border.”