“We will always defend our Yezidis from prejudice and discrimination, whether by Kurdish Muslims or others.” —Nechirvan Barzani, former prime minister of the autonomous Kurdistan Regional Government. 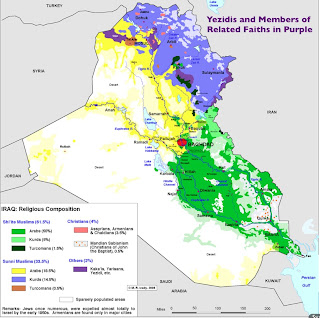 According to an October 24, 2010 report by al Jazeera, the worst suicide bomb attack during the seven years of the Iraq war occurred “when multiple truck bombs devastated two villages of the Yazidi minority sect.” The August 2007 blast, which killed almost 800 people, has by no means been the only attack on the Yezidis. Yezidi sources regard the assault on their community as genocidal. According to their most prominent website:

Beginning nearly twenty years ago, Saddam Hussein instigated a pogrom of Yezidi extermination by labeling them “Devil Worshippers” and thereby triggered whole scale [sic] persecution by the Iraqi Moslems. … Although this pogrom was lifted briefly following the US invasion and Saddam’s capture, the harsh conditions appear to be returning. Kurdish Moslems are currently blocking food supplies to the Yezidi villages and they continue to prevent the Yezidis from cleaning up the poisons in their water supply. … Within the mosques adjacent to the Yezidi villages mullahs continue to speak about the “Devil-worshipping Yezidis” and encourage their conversion to Islam or murder. 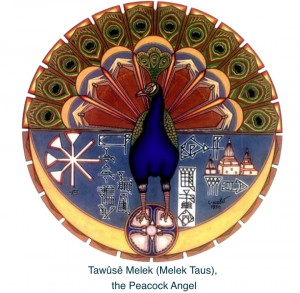 On the rare occasion when the Yezidis are mentioned in the U.S. media, they are generally passed over as insignificant, forming as they do only a few percent of Iraq’s population. Such reporting is misleading: Yezidis number between 500,000 and 750,000 globally, with as many as 650,000 living in northern Iraq. Another 60,000 northern Iraqis follow the related Shabak faith, while as many as a million in Kurdish Iran adhere to a similar sect called Ahl-e Haqq (or Yârsân). Mehrdad Izady calls this complex of religions Yazdânism, which he regards as a survival of the pre-Islamic beliefs of the Kurdish people. He also includes the faith of the Alevis of eastern Turkey. The Alevis—heterodox Shiite Muslims who don’t worship in mosques and do drink alcohol—number some 15 million, on par with the global population of Mormons or Jews. 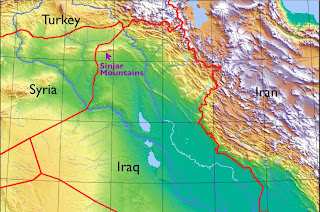 Regarding God as a remote figure, Yezidis worship the seven angels who they believe have dominion over the earth. Chief among them is Malek Taus, the Peacock Angel. Melek Taus is identified with Shaytan, or Satan, the rebellious angel of the Abrahamic (Judeo-Christian-Islamic) tradition, leading to the charges of “devil worship.” The Yezidi spiritual interpretation does not support the accusation. Although Yezidis do find something admirable in the Peacock Angel’s rebelliousness, especially his refusal to submit to Adam, they also believe that he repented of his mutiny against God, and was restored to his rightful place as leader of the angelic host. They certainly make no connection between Melek Taus and evil. Yezidis reject cosmic moral dualism, holding that wickedness lies in the hearts of humans, not in the spirits of heavenly beings.

The Yezidi holy scriptures make interesting reading. A sense of being under siege is clearly present: “The Jews, the Christians, the Moslems, and even the Persians, fought us; but they failed to subdue us, for in the strength of the Lord we prevailed against them.” Islam is singled out for critical commentary, but the curse leveled against its final prophet is rather mild:

This last time [an angel] dwelt among us longer than any of the other [angels] who came before him. He confirmed the saints. He spoke in the Kurdish language. He also illuminated Mohammed, the prophet of the Ishmaelites …, When [the angel] saw that Mohammed was not upright before him, he afflicted him with a headache.

Like many other religions, the Yezidi faith has its fair share of dietary and other behavioral prohibitions. Its proscriptions against certain vegetables, however, is unusual:

So hass (lettuce) is debarred. We do not eat it, for it sounds like the name of our prophetess Hassiah. Fish is prohibited, in honor of Jonah the prophet. Likewise deer, for deer are the sheep of one of our prophets. The peacock is forbidden to our Šeich and his disciples, for the sake of our Tâ’ûs. Squash also is debarred.

The current relationship between the Yezidis and the Kurdish Regional Government (KRG) is much like that between the Assyrian Christians and the KRG. Kurdish authorities pledge to respect and protect the Yezidis, but in return demand Yezidi support for the expansion of the autonomous region. As reflected in Barzani’s quotation above, many Kurds feel an affinity for the Kurdish-speaking followers of Malek Taus: “our Yezidis.” Many Yezidis, however, rebuff the embrace, refusing to call themselves Kurds and opposing the expansion of the autonomous zone. Yezidis have been barricading their villages to forestall attacks, trusting in the relative remoteness of their main communities. One of the principle Yezidi redoubts is the Sinjar Mountain, an isolated range rising from the semi-arid plains northern Iraq, deep within the contested zone.

The story of the Yezidis is instructive in several ways. It illustrates well the religious diversity of Southwest Asia’s “Heterodox Zone” (see Geocurrents, January 26, 2010). Such diversity is not surprising in the birthplace the Abrahamic faith-family: it is a basic principle of geography that areas of origin typically form centers of diversity. The survival of the Yezidi faith, despite periods of persecution, also speaks to the historical toleration of “Islamdom” relative to “Christendom.” It is hard to imagine the continued existence of people worshiping the rebel angel in late medieval or early modern Europe. But the current plight of the Yezidis also shows that such toleration is waning fast, especially in Iraq. Sunni extremism, feeding on geopolitical disputes of global reach, has been steadily stripping away religious diversity, a process began with the expulsion of the Jewish community of Baghdad in the late 1940s and early 1950s. Will it end with the eviction of Christians, Yezidis, Shabaks, and Mandeans* from all parts of Iraq outside of the Kurdish autonomous region?

The situation of the Yezidis also gives the lie to humanitarian claims that the global community will “never again” sit by while entire ethnic groups are targeted for removal or extermination. When it comes to such politically inconvenient examples of ethnic cleansing as that suffered by the Yezidis, the typical reaction is to look the other way, or to dismiss the community as too small to merit consideration.

The Yezidis have few champions in the wider world. They do occasionally benefit, however, from their association with the other beleaguered peoples of Iraq. On November 2, 2010, the government of the Netherlands announced that “the situation in Iraq is not so unsafe that failed asylum seekers cannot be deported back to Iraq.” But the Dutch government allowed that members of vulnerable minority groups, including “Iraqi Christians, Mandaeans, Yezidis, Palestinians, Jews and Shabaks … can more easily appeal for protection without a lot of evidence.”

*The Mandeans, or Sabians, revere John the Baptist as their main prophet, thus forming another Abrahamic faith.