The Flawed Standard Model of Geopolitics

(Note to Readers: GeoCurrents is now resuming publication after its winter hiatus. Over the next 10 weeks, posts will be oriented toward a weekly lecture course that I am teaching on the history and geography of current global events. The first lecture, given on March 31, examined an overarching issue that is essential for understanding many pressing events of the day: the fraying standard geopolitical model of the world. This taken-for-granted model posits mutually recognized sovereign states as the fundamental building blocks of the global order. Many of these basic units, however, are highly fragile and a number have collapsed altogether. As a result, the next several posts will consider, and critique, the conventional state-based vision of the world.

The second lecture for the course, to be given on April 7, will examine the situation in Yemen. As a result, next week’s posts will be focused on that country. Subsequent lectures and posts will be determined later as global events unfold. As always, informed comments and questions are welcome.) 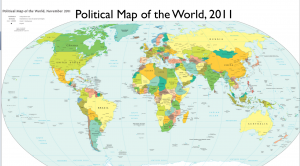 As long-term GeoCurrents readers are probably aware, I am skeptical of the standard “nation-state” model of global politics, as I think that it conceals as much as it reveals about current-day geopolitical realities. This model, evident on any world political map, rests on the idea that that the terrestrial world is divided into a set number of theoretically equivalent sovereign states. Each state is supposed to hold ultimate power over the full extent of its territory, possessing a monopoly over the legitimate use of force and coercion. Such states, it turn, are supposed to recognize each other’s existence, and in so doing buttress a global order in which political legitimacy derives in part from such mutual recognition. The territories of such states are theoretically separated by clearly demarcated boundary lines, which are further solidified by international consensus, without overlap or other forms of spatial ambiguity. Ideally, national territories are contiguous and can thus be easily mapped as single units, rather than scattered across the map in widely separated pockets, as was characteristic of premodern geopolitical systems based on feudalism and dynastic authority.

The standard geopolitical model is explicitly territorial, equating the state (government, in essence) with the area that it rules (the country). As a result, the terms “sovereign state” and “independent county” are fully synonymous. But the model takes a further step by linking in as well the concept of the nation. A nation, as strictly defined on political grounds, is a group of people with common feelings of belonging to a single political community, ideally rooted in cultural commonalities, that either exercises, or aspires to exercise, self-rule. In earlier historical periods, most states made no pretense of being nations, and were instead organized as multi-national empires, subnational city-states, or dynastic kingdoms that ruled over but did not represent their varied human subjects. But with the rise and spread of nationalism in the 19th and 20th centuries, the ideal political form came to be the nation-state, one in which the state bolstered its legitimacy by claiming to represent its given nation. In the post-WWII era, it came to be assumed that all sovereign states either already were nation-states or would soon gain that status through the process of “nation-building.”

This new model of global political geography was formalized and institutionalized with the creation of the United Nations in 1945. As the very name of the organization makes clear, the fundamental unit of geopolitics was now defined as the nation, taken to be exactly the same thing as the sovereign state or the independent country. In the U.N. General Assembly, each member is an equal participant and hence an equivalent unit. All are taken to be self-governing units with full sovereignty that represent distinct nations, occupy clearly demarcated territories, and recognize the legitimacy and territorial integrity of each other. On these grounds, the United Nations is supposed to promote international cooperation and work toward global concord. 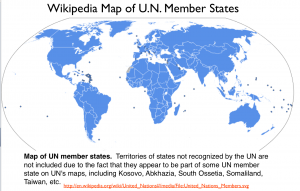 As this standard model of global politics has triumphed in the public imagination, the map of the member states of the U.N. has come to mirror the world political map. In the Wikipedia map posted here, only one territory— Moroccan-occupied Western Sahara—appears on first glance to occupy an anomalous position. Closer inspection, however, reveals two smaller non-U.N. areas, mapped as grey circles: the Vatican City and the Palestinian territories. (Countries too small to be easily visible on the map are mapped as circles, thus ensuring that all are represented.) Overall, the show a nearly solid expanse of distinct blue units, members of the U.N. that are also sovereign national powers.

But does it really? Taiwan is not a member of the United Nations, yet it is seemingly mapped here as if it were. Such a misleading portrayal is done in deference to the government of China, which views Taiwan a renegade province that will eventually be united with the mainland, even though it is actually a fully independent country. Similarly, Kosovo is mapped as if it were part of Serbia, even though it is also sovereign state, and one that is recognized as such by 108 out of 193 U.N. members. Equally problematic, a number of non-sovereign but self-governing territories that are not themselves members of the U.N. are nonetheless mapped as if they were, marked by distinct blue circles. Examples here include the “Crown dependencies”—the Isle of Man and the bailiwicks of Guernsey, and Jersey—anomalous territories that fall under the sovereignty of the United Kingdom yet are neither parts of it nor colonies of it. More troubling is the fact that the map also seemingly classifies as members of the United Nations (again, as indicated by their distinct blue circle) a number of territories that U.N. itself has placed on its list of non-self-governing territories, such as Gibraltar, French Polynesia, and Bermuda. According to the U.N., these are colonized throwbacks to an earlier era that should be granted independence, given full and formalized self-rule, or subsumed within the territory of an existing U.N member state.

Although it is easy to criticize this map for such infelicities, devising a more accurate portrayal would be no simple matter, as the actual geopolitical situation of the world is considerably more complex than the picture conveyed by the standard model. Many territories occupy inherently ambiguous positions in regard to such crucial characteristics as “sovereignty,” “independence,” and “international recognition,” and hence cannot be mapped in a straightforward manner.

The crucial flaw of the standard model is that it is based on a prescriptive rather than a descriptive view of the world yet never acknowledges that fact. What it shows, in other words, is how certain political actors and entities think that that world should be politically organized rather than how it actually is organized. Most world political maps thus show a country called “Western Sahara” even though there has never been a sovereign state of that name occupying that territory. Such “actors and entities” refer in general to the governments of the U.N.’s constituent members, which have a vested interest in the perpetuation of the existing system. But even here profound disagreements persist, as can be seen in regard to the debates over the political standing of such places as Taiwan, Kosovo, Israel, and the Palestinian Territories. 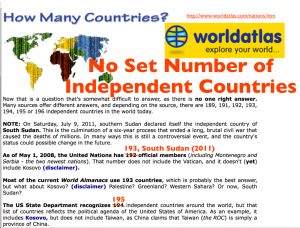 As a result of such complications, it is impossible to answer such a seemingly simple question as “how many countries are there in the world today?” As the image posted here show, answers vary according to how the term is defined and whose particular viewpoints are taken into account. A degree of ambiguity and uncertainly is thus acknowledged – but only a degree. Standard reference works allow only slight variation in how the world’s sovereign states are enumerated, with accepted figures generally ranging from 189 to 197.

By the same token, other irregularities in the standard geopolitical model are also widely recognized, such as the presence of hotly contested borders and the existence of complex arrays of exclaves and enclaves in which small pieces of one country are wholly surrounded by the territory of another. But such features are generally regarded as minor exceptions to a general pattern that still holds firm.

In the decades following the formation of the United Nations, the actual political map of the world seemingly came into ever closer accord with the standard model, as decolonization progressed and as numerous newly independent states made progress in inculcating a degree of national solidarity among their citizens. But more recently, the model has begun to unravel, as previously solid-seeming states collapse and as state-like organizations and unrecognized but effectively sovereign entities proliferate. Somalia has been something of a ghost state since 1991, and more recently Syria, Yemen, and Libya have ceased to function as coherent countries, yet they still remain firmly ensconced on our political maps, unlike such effectively independent but unrecognized entities as Iraqi Kurdistan and Somaliland. Recognizing the reality of this current geopolitical predicament is essential for dealing with it successfully. If one remains beholden to the exhausted model, one risks disengaging from reality in preference for a fantasy world increasingly divorced from actual circumstances.

Some evidence suggests that serious problems have already been generated by undue faith in the standard geopolitical model. When the United States and its partners invaded Iraq in 2003, planners assumed that Iraq was a solid nation-state firmly united by a sense of common Iraqi identity, and that as a result the country could be easily transformed into a democratic state though imposed regime change followed by the institution of free elections, the rule of law, and other trappings of democracy. But as 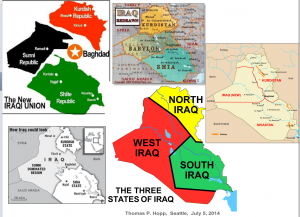 events showed, Iraq was actually nothing of the kind. To be sure, a sense of Iraqi identity had emerged among many segments of its populace, but when push came to shove, it quickly became apparent that such national solidarity was relatively superficial, overridden by regional, sectarian, linguistic, and other forms of identity. International policy is still based on the idea of the intrinsic national unity of Iraq, but such a vision increasingly seems illusory. I doubt that Iraq will ever be reassembled into anything approaching a functional state, let alone a coherent nation-state. To the extent that it continues to exist on our maps, it will likely be little more than a mirage. 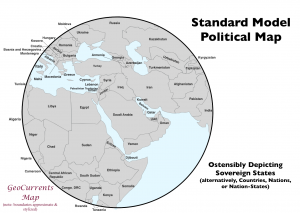 To demonstrate the frailty of the standard geopolitical model, the next few GeoCurrents posts will illustrate its inconsistencies and anomalies through a series of maps depicting the current geopolitical situation in a sizable region focused on the so-called Middle East. Rather than using the conventional world region of that designation, I have outlined a circular area centered in northern Saudi Arabia. I have pursued this strategy in order to accommodate as much disorder as possible within a circumscribed area, one that encompasses troubled areas ranging northeastern Nigeria to eastern Ukraine to the borderlands of Afghanistan and Pakistan. Within this broad zone, as we shall see, the standard geopolitical model fails repeatedly to convey existing realities.