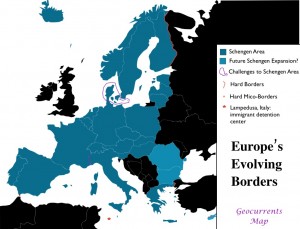 Over the past several decades, Europe has been dismantling border controls, creating the zone of free movement informally known as Schengenland. Although the Schengen area is scheduled to expand into the southeastern European Union countries of Bulgaria, Romania, and even divided Cyprus, such a development seems increasingly unlikely. Even in the core EU countries, the integration process is currently running in reverse. On May 14, 2011 an exaggerated headline in The Independent proclaimed that the “flood of North African refugees ends EU passport-free travel.” In actuality, “the EU” never had “passport-free travel,” as several EU countries (Britain, Ireland) remained outside the Schengen area, while several non-EU countries (Iceland, Norway, Switzerland) opted in. More important, passport-free travel within Schengenland has not ended. But it is threatened. In April 2011, French authorities began checking trains arriving from Italy, looking for undocumented North African immigrants. France insisted that such actions were unrelated to the establishment of border controls, but both France and Italy have proposed the re-establishment of border checkpoints in certain circumstances. A more far-reaching challenge to open travel came in early May 2011, when Denmark announced that it would reestablish controls along its frontiers with Germany and Sweden. Immediately afterward, the European Union threatened Denmark with legal reprisals.

Denmark’s action came about through a series of parliamentary negotiations. The country’s governing coalition includes the Danish People’s Party (Dansk Folkeparti, or DF), a right-wing, populist organization that advocates strict limits on immigration and is skeptical of European integration. The People’s Party also generally supports social welfare spending, provided that it is not oriented toward immigrants. Other issues, however, come first. The leading party of Denmark’s governing coalition, the center-right Liberal Party,* had been trying to phase out a costly early retirement program. Support from the People’s Party was necessary to push through the reform, but its leaders initially balked, wary of reducing governmental support for elderly Danes. Before signing on, they demanded a major change of their own: the re-imposition of border controls. The deal was subsequently accepted and pushed through parliament, putting Denmark at odds with the rest of the Schengen community.

The Danish government insists that renewed border controls are not aimed at immigrants, but rather at staunching the flow of illegal drugs and the activities of crime syndicates based in Eastern Europe. It is no secret, however, that the People’s Party wants further restrictions on the movement of people. The party, which won almost fourteen percent of the vote in Denmark’s 2007 parliamentary election, has already helped push through the EU’s toughest immigration rules. Further limitations are now being discussed. A recent report put together by five governmental ministries contends that existing restrictions have saved the Danish government five billion kroner (roughly 900 million dollars) per year since 2002, mostly from reduced social-service expenditures. As a result:

The government and its main ally, the Danish People’s Party (DF), intend to use the findings from the report to further tighten the immigration rules. …The [People’s] party also wants the local authorities to encourage immigrants who cannot find work in Denmark to return to their home countries.

If Denmark has saved money by restricting immigration, the same will almost certainly not be true in regard to the re-imposition of border controls. EU legal action against Denmark could prove costly, and the check-points themselves will be expensive to run. According to Gerd Battrup of the Department of Border Region Studies at the University of Southern Denmark, controls will result in a reduction of trade and tourism, and will also impose costs on “highly-skilled cross-border commuters, who would be discouraged by hassles and delays associated with border checkpoints.” If such commuters decide to quit their jobs in Denmark, Battrup argues, the Danish economy will suffer.

Denmark’s hardening of its borders might also impinge upon travelers from the United States. In late 2010, representative of the Danish People’s Party proposed instituting more thorough checks of U.S. citizens entering the country. “We have to acknowledge that the Americans haven’t had as good a handle on their counter-terrorism as we thought,” argued party spokesman Peter Skaarup. Particular scrutiny, his party contends, should be applied to “US citizens who have travelled many times to countries such as Afghanistan and Pakistan.”

* The party is officially called, in Danish, Venstre, Danmarks Liberale Parti, which translated as “Left, Liberal Party,” a rather ironic name for a center-right organization.