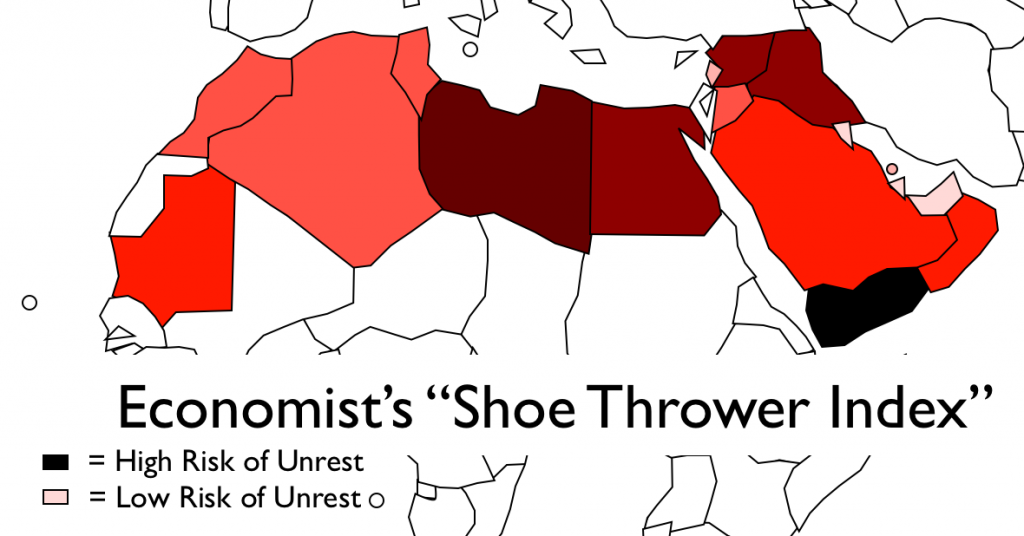 As revolution in the Arab World spread from Tunisia, The Economist magazine developed a “Shoe-Throwers Index” (STI). The STI combines available data for most of the Arab League to gain insight into what countries are at the greatest risk for revolution. Originally published on February 9th, the STI came out two days before the departure of Egypt’s Hosni Mubarak. Since then, several countries high on the list have also experienced massive unrest.

The STI is formatted through several indicators, which are all weighted separately (as shown in this Economist video.) By far the most heavily weighted factor of the index is the percentage of population under 25 (the greater the percentage, the higher the score), which accounts for 35% of the total STI score. Other factors include the number of years a ruler has been in power, democracy rankings, and corruption rankings, each of which individually account for 15% of total score. (For a more in-depth analysis of the variables, go here.) Overall, the STI compiles a unique set of information, often relying on other rankings to complete the index. However, The Economist was careful not to include every piece of relevant data.  For example, the data on unemployment was considered “too spotty” to be used. More recently, The Economist has provided an interactive index, which allows users to change factor weighing, and thus generate unique “Shoe Thrower” indices.

Several relatively straightforward geographical patterns are apparent with the STI, as shown in the map above. The clearest pattern is found among the rich Gulf States, especially Qatar, Bahrain, and the U.A.E. Here, oil and gas wealth in combination with higher levels of social development has generated low STIs; these countries have some of the lowest percentages of population under the age of 25.  The Maghreb (Morocco, Algeria, and Tunisia) also scores relatively low in the STI, as in all three countries less than half of the population is under 25. The countries that top the STI list –Yemen, Libya, Syria, Iraq, and Egypt — do not share much geographically; beyond the fact Egypt/Libya and Iraq/Syria have common borders.

Has the STI been successful in forecasting which countries in the Arab world are at the great risk for further unrest? In many cases, the STI has been on target, especially in regard to countries at the top and bottom of the rankings. Yemen, the highest scorer, was relatively calm when the index came out, but since that time it has undergone intense turmoil, with prominent government officials resigning. The country with the second highest score, Libya, has experienced not just protests but an actual revolution, eliciting a major international response. In third-ranking Egypt, protests were already in progress when the index was created, which eventually dislodged Mubarak. The fourth country on the list, Syria, has also experienced recent protests and crackdowns. On the other end of STI, Qatar, Kuwait, and U.A.E. have not been substantially impacted by unrest, and Qatar and U.A.E. have even provided military help to the international mission in Libya.

In some countries, however, the STI fails to explain recent events. Most notably, Bahrain has the fifth lowest score, but has still seen intense protests. Iraq, fifth on the list, has experienced some anti-government demonstrations, but they seem unrelated to the democratic wave moving across the Arab World. Furthermore, the country that set-off the wave of unrest, Tunisia, ranks as relatively stable. Although the index does highlight zones of potential unrest, it does not do so perfectly.

Analyzing the STI indicates some problems that arise when one attempts to create a single index for a continually changing dynamic of contemporary events. One of the first issues faced by The Economist’s researchers was to decide which countries to include. They initially selected the Arab League, but “took out the Comoros and Djibouti, which do not have a great deal in common with the rest of the group, and removed the Palestinian territories, Sudan and Somalia for lack of data.” Although this maneuver may seem reasonable, the STI left out Iran, which, although not in the Arab League, has also experienced significant protests. On the BBC website, an informational map of the unrest diverges from The Economist selection. The BBC includes Iran, but leaves off Iraq Qatar, Kuwait, and U.A.E. Although excluding the Gulf States for a map of unrest is understandable, the BBC map contains a significant difference in viewpoint from that of The Economist.

Another problem with the STI is that of signaling a country’s chance for uprising with a single number calculated through a standardized system. Although Libya and Bahrain may be grouped together into the same region, they are separated by vast social, political, and economic differences. Libya, for example, is noted for its harsh autocratic rule and its tribal divisions, whereas the major challenge facing Bahrain is its religious schism between the ruling Sunnis and the majority Shi’ites. Libya and Bahrain demonstrate that while the STI does provide some insight into some of the factors that cause unrest, it cannot predict where unrest will occur or what form it will take.

Create Your Own STI With Custom Factor Weighting