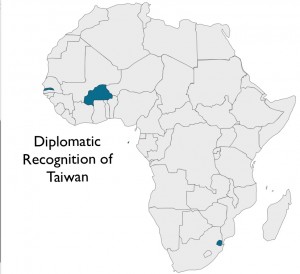 Recent African news reports often focus on investments and diplomatic initiatives undertaken by the People’s Republic of China (PRC). Yet when one scans the news from The Gambia, the PRC figures little, whereas the Republic of China (Taiwan) looms large. Recent stories in the Gambian press have focused on Taiwan’s Ministry of Foreign Affairs awarding scholarship packages to 27 Gambian college students to study on the island country, the initiation of a four-year project aimed to triple Gambian rice production, and the donation of funds to Gambian orphanages by the Taiwanese shipping firm Pacific Concord International Limited.

As can be gathered from these stories, Taiwanese activities in The Gambia focus more on humanitarian concerns than on economic investments. Taiwan is eager to offer such assistance in order to maintain its diplomatic standing in the world; The Gambia is one of only four African countries (along with São Tomé and Príncipe, Burkina Faso, and Swaziland) to officially recognize the Republic of China rather than the People’s Republic of China. (Six countries in Oceania and twelve in Latin America and the Caribbean also recognize Taiwan).

Retaining such diplomatic recognition is extremely important to Taiwan. In April 2012, Taiwanese president Ma Ying-jeou undertook a twelve-day tour of three Taiwanese allies in Africa, visiting The Gambia, Burkina Faso, and Swaziland. In Burkina Faso, as reported by the Taipei Times, “Ma was greeted by Burkinabe President Blaise Compaore at the airport, where he was welcomed with full military honors, complete with a 21-gun salute.” The article further noted that Taiwan would “provide more assistance to Burkina Faso in the areas of education, medical care, transportation and agriculture.” One of Taiwan’s largest initiatives in Burkina Faso, “A Lamp Lighting up Africa,” provides solar-powered LED lamps for students in the impoverished country.