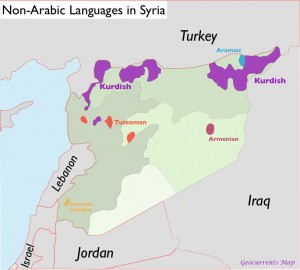 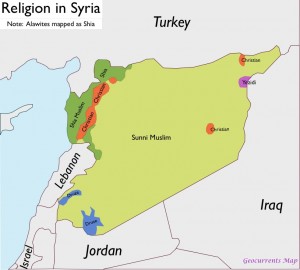 In fact, Sunni Arabs are not as demographically dominant as they might seem. To begin with, the basic numbers are disputed; Alawites, as discussed in a previous post, may constitute as much as twenty percent of Syria’s population. The Sunni population also includes many non-Arabic speakers, including most Kurds–and the Kurdish population may form fifteen or even twenty percent of the total, according to Kurdish websites. Christian numbers are also likely under-reported, as they seldom include the hundreds of thousands of Iraqi Christian refugees living in the country. The Arab Sunni population itself, moreover, is internally divided. Arab Syrians speak widely divergent dialects that most linguists regard as separate languages. As the language map shows, the Arabic dialects of eastern Syria are related not to those of western Syria but rather to those of Iraq. 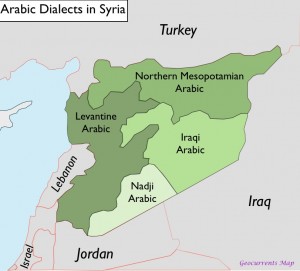 Grouping the heterodox Alawites and Druze as “other Muslim” also understates Syria’s diversity. As recounted in the previous Geocurrents post, many Muslims – perhaps most – do not reckon Alawites as members of the community of the faithful. The Islamic standing of the Druze religion is still more questionable, as the Druze generally regard Jethro (father-in-law of Moses) rather than Mohammed as their main prophet. But the Druze conceal their beliefs so extensively—even from the bulk of their own population—that it is difficult to say what they actually believe. Syria’s half-million strong Druze community may constitute only two and a half percent of the country’s population, but the Druze have long formed a politically capable and militarily potent congregation. As the Wikipedia puts it, “The Druze always played a far more important role in Syrian politics than its comparatively small population would suggest.”

The ethno-religious complexity of Syria has long challenged the country’s government. Under the rule of military strongman Adib Shishakli in the early 1950s, “Syrianization” campaigns sought to aggressively meld the population into a single ethnicity/nationality, provoking clashes between the national army and Druze militias. Partly as a result, non-Sunni Arabic speakers gravitated to the Baath Party, whose brand of Arab Nationalism encompassed most minority groups – with the notable exception of the non-Arab Kurds* (see the earlier Geocurrents post). Under the current Baathist regime, the Sunni majority has generally co-existed peacefully with Christians, Druze, and Alawites. According to the government, such concord demands the harsh repression of an autocratic government. In a March 30, 2011 speech, President Bashir al-Assad blamed outside agitators, particularly Israelis, for the current unrest, insinuating that the fall of his government would unleash a sectarian bloodbath. Considering events in Iraq after the ouster of Saddam Hussein, such forebodings are being taken seriously in the White House. David Lesch argues that “the Obama administration wants [Assad] to stay in power even as it admonishes him to choose the path of reform.” (Republican presidential candidate Tim Pawlenty, on the other hand, is urging much stronger punitive action against the Assad regime.)

It is difficult to find information on the position of Syria’s minorities in the current struggle. According to one recent report, “The Syrian Revolution 2011 Facebook group, a key player in organizing the protests, appealed to the Druze of Syria to join the protests against the Syrian Regime.” Another source notes that the controversial Lebanese Druze politician Wiam Wahhab “implored his Syrian co-religionists to remain loyal to Bashar al Assad ….  ‘[T]he Syrian regime must not be tampered with since in the event of Assad’s downfall the whole region might drift into utter destruction for the next 100 years,’ he said.” Wahab’s efforts might indicate that support for Assad is teetering among the Druze population.