ISIS Advances and the Kurds Retreat In Northern Syria 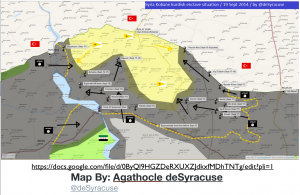 The struggle involving the Islamic State (alternatively, ISIS or ISIL) in northern and eastern Syria and northern Iraq is finally receiving abundant coverage in the global media. Today’s (Sept. 21) New York Times, for example, features several articles on the issue, focused mostly on the international complications generated by the conflict. Many publications in the U.S., however—including the Times—have either downplayed or ignored altogether the major offensive that the Islamic State is currently conducting against Kurdish forces in the Kobanê region of northern Syria. A major Kurdish enclave is currently gravely imperiled, threatening another human rights catastrophe. As reported today in Reuters:

“ISIL (Islamic State) are continuing to advance. Every place they pass through they kill, wound and kidnap people. Many people are missing and we believe they were kidnapped,” Welat Avar, a doctor, told Reuters by telephone from Kobani. “We now urgently need medicines and equipment for operations. We have many casualties … ISIL killed many people in the villages. They cut off the heads of two people, I saw it with my own eyes,” he said.

A Kurdish politician from Turkey who visited Kobani on Saturday gave a similar account of the Sunni militants’ tactics. “Rather than a war this is a genocide operation …” 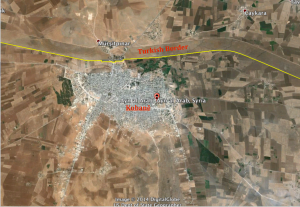 As a result of the ISIS advance and the corresponding atrocities committed, tens of thousands of Kurds are streaming into Turkey, which has recently opened a stretch of its border to Kurdish refugees. The situation on the Turkish side of the boundary, however, is evidently chaotic, resulting in clashes between the fleeing Kurds and Turkish police forces. Most Kurds do not trust Turkish authorities, who they believe are tolerating, if not actively collaborating with, the Islamic State. The recent release of Turkish hostages by the Islamic State feeds into such speculations. Some outside experts concur. As was recently reported in the Los Angeles Times:

“I think it’s self-evident that there was some sort of quid pro quo,” said Howard Eissenstat, a Turkey expert at St. Lawrence University in New York, speaking of the release. “I think what’s likely is Turkey gave some sort of guarantee that its actions against ISIS would be limited in nature and it wouldn’t play a primary role in any military coalition.” 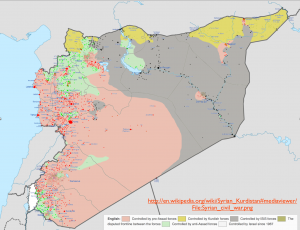 The threatened Kurdish enclave in question forms one of three sections of the de facto Kurdish autonomous region of northern and Eastern Syria, known internationally as Syrian Kurdistan, but referred to in Kurdish as Rojava (“West”), or more formally Rojavayê Kurdistanê. This divided region declared its autonomy in 2012, and since then has been under the control of the People’s Protection Units, commonly called the YPG (after the Kurdish term Yekîneyên Parastina Gel). Turkish authorities tend to be highly suspicious of the YPG, which they view as the military branch of the Kurdish Democratic Union Party, which in turn is affiliated with the Kurdistan Workers’ Party (PKK), a Kurdish organization based in southeastern Turkey that was until last year engaged in an armed struggle against the Turkish state. Although YPG units have proved themselves militarily capable, in the Kobanê area they have not been able to withstand the onslaught of the much more effectively armed ISIS fighters. 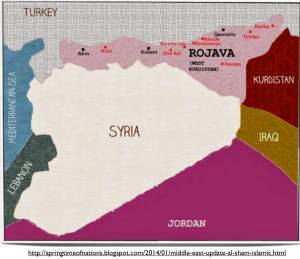 Kurdish partisans claim all of northern Syria for their autonomous region of Rojava, as is indicated in maps that they have produced. Over the past two years, however they have controlled only three widely separated areas. According to most ethnographic maps of the area, the Kurdish-speaking region of Syria covers less territory than the envisaged Kurdish autonomous area, but more territory than the three disjointed areas currently under Kurdish control. These three zones 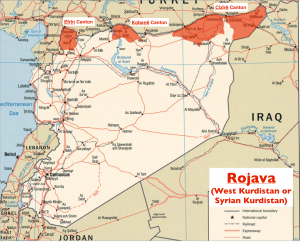 have each been organized as “cantons” by the Syrian Kurdish authorities. Of these, Cizîrê Canton in the east is the most secure, as it borders the Kurdish-controlled region of northern Iraq. Efrîn and Kobanê cantons, however, are relatively isolated, making them highly vulnerable. (Kobanê, it is important to note, is officially known in Syria under its Arabic name, Ayn al-Arab; both the Wikipedia and Google Earth use this term.) 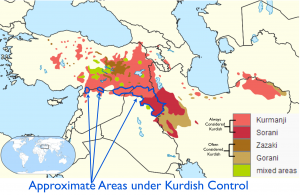 The military forces of the Kurds in Syria have an interesting gender dynamic. Women warriors are well represented among the Kurdish Peshmerga of northern Iraq, but they are more common yet in the YPG. A recent BBC report claims that female fighters account for roughly a third of the organization, making it the most gender balanced combat force in recoded history. The BBC article goes on to claim that:

“Women are the bravest fighters,” says Diren, taking refuge from the scorching heat in the cool of an underground bunker. .. “We’re not scared of anything,” she says. “We’ll fight to the last. We’d rather blow ourselves up than be captured by IS.”

Like the followers of the Islamic State, most Kurds are Sunni Muslims. But that is where the similarities end. Diren says that, to the fanatics of IS, a female fighter is “haram”, anathema: a disturbing and scary sight.

Religious beliefs may play into fears generated by Kurdish female fighters among the ISIS militants, at least according to Ed Royce, chair of the US House International Relations Committee. As reported in The Telegraph:

“These Isil soldiers apparently believed that if they were killed in battle, they went to paradise as long as they were killed by a man,” he told The New York Post, citing reports of Kurdish female fighters laughing as they repelled attacks by the extremist group.

I find it intriguing and disturbing that the ISIS advance and the Kurdish retreat in northern Syria are receiving little attention from the U.S. media. I suspect that this lack of concern stems from the uncomfortable situation presented by the Kurdish militias in the region. The policy of the United States and its allies is based on the sacrosanct nature of official boundaries and geopolitical units in the region; Iraq and Syria must, according to this doctrine, be reconstituted as coherent nation-states. Kurdish aspirations, however, run counter to this idea. Whether the American policy in question is based on realistic assessments is another matter altogether. As I have argued elsewhere, the idea that these two countries can remerge as coherent, self-governing, non-autocratic states may be nothing more than a delusion. Will the Kurds be sacrificed to such a geopolitical fantasy? I hope not, but the events of this past week do not leave me feeling very optimistic.