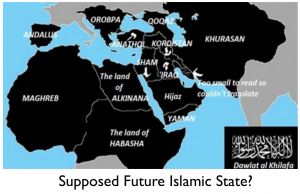 The geopolitical entity that calls itself the Islamic State, also known as ISIS or ISIL, has generated some interesting maps. Today’s post examines a map that ostensibly shows the area designated for conquest and rule by ISIS leaders. Widely disseminated across the Internet, it evidently originated on Twitter, but its creator remains unknown. Media Matters for America has advanced some skeptical claims about the map:

On June 3 [2014] ABC News published a map — also cited by Breitbart.com — which was “purportedly published” by ISIS and “widely shared on Twitter.” According to ABC, the “terrifying” map was “published at the same time that ISIS announced the creation of a caliphate.” But ABC News didn’t actually trace the image to ISIS, and instead relied on a tweet of the image from American Third Position (A3P). …

As iO9 pointed out, “This is one of those ‘garbage in, garbage out’ stories, since ABC News’ source was Twitter.” The outlet cited to analysis from Aaron Zelin, a fellow at the Washington Institute for Near East Policy, who explained, “It’s an old image put out by fans of the group … There is nothing official about it nor is there some alleged 5-year plan.” 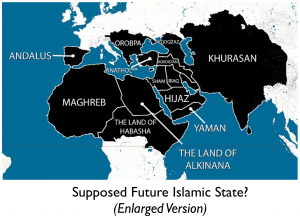 Regardless of its ultimate provenance, two versions of this map have been widely put forward, which vary mainly in their treatment of South Asia. The territorial divisions and labeling system used in both versions are curious, indicating a poor understanding of historical geography. The following discussion focuses on the second map, which shows the Islamic State of the future as including India.

Extreme Islamists generally claim that any lands that were ever under Muslim rule must be redeemed to Islam. A good example of such a vision is evident in the map posted here that was produced by Hizb ut-Tahrir, a Lebanon-based organization “associated with the goal of all Muslim countries unifying as an Islamic state or caliphate ruled by Islamic law (sharia) and with a caliph head of state elected by Muslims.” It is no surprise, therefore, that the maps associated with ISIS depict Spain and Portugal as parts of the future Islamic State, as they were once under the rule of the Umayyad Caliphate, or 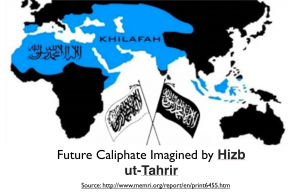 that they include the Balkan Peninsula, which was long ruled by the Ottoman Empire. But in neither case does the ISIS map get the boundaries quite right, unlike the map made by Hizb ut-Tahrir. Far northern Spain, for example, was never conquered by Muslims, nor were modern Austria and Slovakia — both of which are nonetheless placed within the fantasized Islamic State. Yet at the same time, other parts of Europe that had once been under Muslim power, such as Sicily and southern Ukraine, are excluded from the realm. So too is the important Muslim zone of Tatarstan in Russia’s central Volga region.

Similar problems are encountered in the depictions of Africa and Asia. Vast areas of sub-Saharan Africa that have small Muslim populations at present and were never under Muslim rule are depicted as parts of the future Islamic State, yet the historically Muslim Swahili Coast of Tanzania is excluded, as are the Comoros (the Hizb ut-Tahrir map gets this wrong as well). In Asia, virtually all of India and Tibet are mapped within the Islamic realm, but Muslim Bangladesh is left out, as are Malaysia and Indonesia. A few scattered exclaves and enclaves, such as the small, unmarked area in eastern Kazakhstan, are less explicable still.

The labeling is also unusual. Some of the terms used are common, but the areas that they depict extend beyond the normal designations. The Maghreb, for example, is pushed down to the sea in West Africa, while the Hijaz swallows both Oman and the UAE. “Habasha,” which refers to Ethiopia and especially its core region that was once called Abyssinia, is also greatly expanded.* The sizable area designated as “Kordistan” is noteworthy, as it roughly covers the Kurdish-speaking area, making it the map’s only ethnically defined territory; such a cartographic depiction is usually limited to Kurdish nationalists — who are now at war with the Islamic State. Other labels on the map are seldom encountered, such as “Alkinana” for Egypt and environs. This term perhaps goes back to the initial Muslim conquest of Egypt in the seventh century. 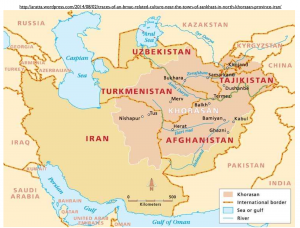 The most striking feature of the map to my eyes is the vast expansion Khurasan, a term conventionally limited to eastern Iran and adjacent areas in Central Asia. This oddity perhaps stems from the Muslim prophesy about “black flags from Khorasan,” emblems referenced by the Islamic State’s own black banners. As explained in the website appropriately called Black Flags from Khorasan:

According to the prophecies of prophet Muhammad (Peace Be Upon Him), a non-stop army will rise from the land of Khorasan holding Black Flags of Islam in the end times. This army will conquer several occupied lands of Muslims till it reaches to Jerusalem. Then it will pledge its allegiance to Imam al Mahdi (alyhe salam).

It must also be noted, however, that many Muslims doubt this story. As argued in Islam Today:

The hadîth about the army with black banners coming out of Khorasan has two chains of transmission, but both are weak and cannot be authenticated. If a Muslim believes in this hadîth, he believes in something false. Anyone who cares about his religion and belief should avoid heading towards falsehood.

All told, these maps of the future Islamic State are amateurish productions that should not be taken too seriously. They do indicate, however, some odd and intriguing ideas about historical, contemporary, and future geography.

* This feature of the map has generated an odd controversy in Ethiopia. One website in the country claims that this map “shocked the Oromo Community” by depicting “the dream of every amhara and tigre,” as the Amhara and Tigre ethnic groups formed the core of historical Abyssinia. But a substantial majority of the Amhara and Tigre are Christian, whereas almost half of the Oromo are Sunni Muslims.