The current issue of Time magazine features an article by Robert Kaplan that emphasizes the geographical aspects of what he refers to as “endless chaos and old-school conflicts,” especially in regard to Ukraine. In general, I appreciate Kaplan’s insistence on the abiding importance of geography and I am impressed by his global scope of knowledge, although I do think that his analyses tend to be a bit too simple. My reaction to his most recent article is much the same. 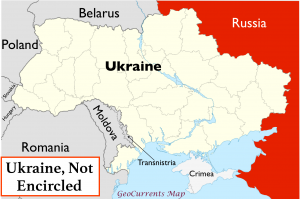 Here Kaplan stresses Ukraine’s military and economic vulnerability imposed by its relatively flat terrain and its proximity to the Russian heartland. His assessment is clear: “the dictates of geography make it nearly impossible for that nation to reorient itself entirely to the West.” Kaplan reiterates this point in the caption of his map of “Ukraine/Crimea”: “Ukraine is too enveloped by Russia to ever be completely tied to the West. Crimea gives Russia its only access to a warm-water port.”

Many works on the current conflict emphasize the significance of warm-water ports, the pursuit of which have been a historical mainstay of Russian geopolitics. It is essential to note, however, that the naval value of Crimea’s Sevastopol is rather seriously compromised by the fact that its access to the high seas is constrained by Turkey’s—and hence NATO’s—possession of the Bosporus and the Dardanelles. Yet Sevastopol certainly is of regional strategic value, as became evident in August 2008, when Russian ships based there were used to blockade Georgian ports.

Kaplan’s emphasis on Russia’s envelopment of Ukraine is less often encountered, and for good reason, as it is hardly evident on the map. As can be seen from Kaplan’s own visualization, only about a third of Ukraine’s border fronts on that of Russia. Further analysis, however, along with more detailed mapping, strengthen Kaplan’s envelopment argument. Consider, for example the position of Belarus, which sits across Ukraine’s northwestern border. If Belarus is counted as a Russian satellite, as it often is, then Russian-dominated territory does come much closer to encircling Ukraine. Yet the actual geopolitical position of Belarus is hotly debated. According to the title of Andrew Wilson’s recent article in Foreign Affairs, “Belarus Wants Out”—out of the Russian embrace, that is. As Wilson perceptively writes, “Above all, [Belarussian leader Alexander] Lukashenko wants to avoid having to make a decision between Russia and the West. He has always been happy to be Russia’s ally, but only as the leader of a strong, independent state capable of steering its own course.” The fact that Belarus, unlike Venezuela and Nicaragua, has not recognized the independence of the Russian-dominate statelets of Abkhazia and South Ossetia underscores the independence of its foreign policy. Lukashenko’s avoidance of choosing between Russia and the West is also evident from his recent actions. While accepting the results of the Crimean referendum, he has also initiated negotiations with NATO. 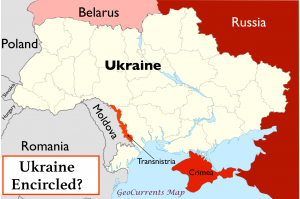 But Belarus is not the only territory unmapped by Kaplan that contributes to potential Russian envelopment of Ukraine. Crimea, of course, is now under effective Russian control, and thus should be depicted as such on maps aimed at showing the de facto rather than the de jure geopolitical situation. Equally significant but more often overlooked is the self-declared state of Transnistria, which is situated along Ukraine’s southwestern flank. Transnistria, like Abkhazia and South Ossetia, is often regarded as a Russian puppet, although its actual situation is complex, as will be seen in a forthcoming GeoCurrents post. The main point, however, remains: if one were to include all of these additional Russian-influenced territories, then it would appear that Ukraine is almost encircled by powers potentially hostile to its current government.

In fleshing out his argument, Kaplan foresees Russian ascendency over eastern Ukraine, owing to its proximity to Russia, its economic importance, and its demographic domination by pro-Russian groups. He does not, however, anticipate annexation of the region:

Putin is not likely to invade eastern Ukraine in a conventional way. In order to exercise dominance, he doesn’t need to. Instead, he will send in secessionists, instigate disturbances, probe the frontier with Russian troops and in other ways use the porous border with Ukraine to undermine both eastern Ukraine’s sovereignty and its links to western Ukraine.

A similar prognosis is made by James Traub of Foreign Policy:

Putin has so many lower-cost options available to him that a large-scale invasion — even one limited to border areas — still seems unlikely. Putin may calculate that he can destabilize Ukraine, and thus turn its dalliance with the West into a failure, by using Russia’s immense economic power to squeeze Ukraine, by blanketing the east with propaganda from Russian media and by sending agents provocateurs to whip up popular discontent. Putin doesn’t “need,” as he put it, to divide Ukraine by force; he just needs to keep it out of the Western orbit. 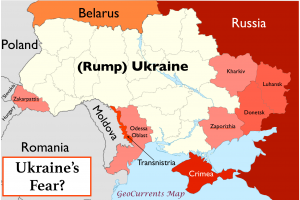 It remains to be seen, of course, whether such events will occur, although Kaplan’s warnings do seem justified. But Putin does not need to “send in” secessionists, as plenty of them are already present, and it does seem odd that Kaplan would write about eastern Ukraine’s “sovereignty,” a quality that the region does not possess.

Such concerns, moreover, are by no means limited to eastern Ukraine. Although the far east is the most Russian-oriented part of the county, pro-Russian sentiments are also widespread over southern Ukraine, including the southwest. Consider, for example, Odessa (both the city and the oblast). Odessa figures prominently in the Russian historical-geographical imagination, and the local Russian minority is substantial. According to The Voice of Russia, thousands of people have recently taken to the streets of Odessa to demand “that the authorities hold a referendum on de-centralization of power in Ukraine, grant the status of a state language to the Russian language and change the country’s foreign policy course.” In recent elections, moreover, the pro-Russian Party of Regions has trounced all other parties in Odessa Oblast. But such Russia-oriented sentiments are far from uniform here, as even The Voice of Russia admits that the protestors that it highlighted were “opposed by local pro-European supporters who asked a court to forbid the march.” By the same token, the Party of Regions handily won the most recent Ukrainian election in Odessa Oblast only because the opposition was divided; as a result, it easily took first place with only 41.9 percent of the vote. In contrast, the Party of Regions won over half of the votes in Crimea and over 65 percent in the eastern oblast of Donetsk.

Odessa Oblast makes an interesting case, as its population is relatively heterogeneous, and in the recent past it was more cosmopolitan than it is today. As of the 2001 census, Ukrainians constituted 62.8 percent of its population, with Russian making up a fifth. Bulgarians, Moldovans, and Gagauz (the latter a Turkic-speaking, traditionally Christian people) together accounted for more than twelve percent of the oblast’s population. Numerous other groups are also found in the region, some of which (Jews, Greeks, and Belarussians) were formerly much more numerous. The Russian population has also been declining, having dropped from 27.4 percent in 1989 to 20.7 percent in 2001. Russian nationalist in the region are no doubt concerned about this decline.

Even far western Ukraine presents a challenge for Ukrainian nationalists. The region in question here is Zakarpattia Oblast, also known (from the Russian perspective) as Transcarpatia and (from the Hungarian perspective) as sub-Carpathian Ukraine (a more neutral term is Carpathian Ruthenia). In terms of physical geography, this is a crucial region, as it lies on the far side of the formidable Carpathian range from the rest of Ukraine, its core area situated in the lowland Danubian basin. Part of Czechoslovakia between the world wars, Carpathian Ruthenia subsequently passed to Hungarian control and then, in 1945, to the Soviet Union and hence Ukraine. Gaining the region gave the Soviet Union a geo-strategic advantage in the Cold War, although Soviet annexation was justified on the basis of its mostly Ukrainian population. But, like that of Odessa, the population of Zakarpattia Oblast is ethnically mixed, although, again, such diversity has long been declining. According to official figures, its population in 1921 was 62 percent Ukrainian, 17 percent Hungarian, and 13 percent Jewish (with significant numbers of Czechs, Slovaks, Romanians, Germans, and others), whereas by 1991 the Ukrainians had increased to over 80 percent while the Hungarians had dropped to 12 percent. The Jewish population, on the other hand, was no longer even tabulated. Russians currently constitute only about 2.5 percent of the population of the oblast.

Despite its large Ukrainian and small Russian populations, Zakarpattia’s voting patterns deviate substantially from those of the other regions of western Ukraine. The pro-Russian Party of Regions, for example, took a plurality (31 percent) of the oblast’s votes in the 2012 legislative election, as opposed to taking less than five percent in the Ukrainian-nationalist stronghold of Lviv. One of the main problems for the Ukrainian nationalist movement here is the presence of the so-called Ruthenian or Rusyn ethnic group. According to Ukraine’s government, such a community does not exist, as its members are merely Ukrainians who refuse to admit as much. Ruthenian partisans, not surprisingly, strongly object to such a classification, and some of them have long advocated independence for their region. According to the Ukrainian source Radio Svoboda, “Moscow has recently been fueling separatist sentiments among the Ruthenians in order to weaken Ukraine.”

The Ruthenian issue is complicated enough to deserve its own post, which will be forthcoming. But as we have seen from this post, the geopolitical situation of Ukraine is complicated indeed.  Further posts this week will explore such complexities in greater detail.

(Note on Maps: In this series of maps, color is crudely used to show the degree of potential Russian domination. Russia itself is shown in the darkest shade of red, with Crimea, now under Russian control, in a slightly lighter shade of the same color, and Transnistria in a still lighter shade. Belarus, being a sovereign state, is depicted in red-orange on the final map rather than a shade of red, in order to signal this difference. In the last map, Ukrainian Oblasts with Russian-speaking majorities are shown in a still lighter shade of red, and those with Ukrainian-speaking majorities that nonetheless exhibit major challenges for Ukrainian nationalism are shown in the lightest shade or red.)