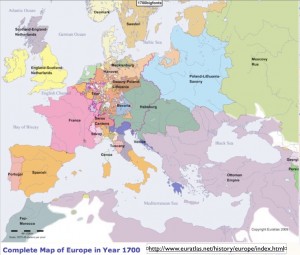 Sovereign states provide the building-blocks of contemporary world mapping. A simple image search of “world map” reveals the state-centered focus of our geographical imagination: a few of the maps returned provide land-mass outlines, and a few others depict continental divisions, but most show the world as neatly partitioned into independent countries. At a more local scale of analysis (“Europe map”), the tendency is if anything more pronounced. Countries are what count; in the public imagination, to know the locations of the member states of the UN is to have mastered world geography.

The same view is retroactively applied to the past. Pick up virtually any historical atlas, and you will find map after map of cleanly colored, clearly demarcated territorial states. As previous GeoCurrents posts have explored, while such maps often purport to depict control, what they often show are mere territorial claims over areas well beyond the reach of the state. This is especially true for depictions of early modern colonial claims in the Western Hemisphere. Maps of Europe in the same period (1500-1800 CE) face a different challenge; here virtually all lands were under some kind of governmental control, yet in many instances sovereignties overlapped. To force past polities into the mold of modern geopolitics is to court confusion.

Consider the Euratlas map of 1700 posted here—one of the most sophisticated portrayals of Europe during this period that is available online. In keeping with modern convention, the cartographer uses solid colors to portray premodern states. One “supra-state” entity is also depicted: the so-called Holy Roman Empire, generally viewed as a feckless federation of independent states. Two “personal unions,” in which one monarch reigned over several separate states, are indicated with labels (“England-Scotland-Netherlands” and “Poland-Lithuania-Saxony.”) Territorially discontiguous states are mapped in one color but are difficult to pick out; on the Euratlas site, however, one can outline such fragmented geopolitical entities with a single mouse-click. Examples here include the Spanish Empire (labeled merely “Spanish”), including Spain, southern Italy, Milan, and most of the southern Low Countries [Belgium], and Prussia-Brandenburg (unlabeled) in the north. The overall impression conveyed by the map is one of vast disparities in size among the constituent geopolitical elements of Europe. Relatively large polities dominate the western, eastern, and northern areas, whereas the central swath running from Italy to the North Sea (“German Ocean”) is a shatterbelt of micro-states. Much of central Europe is unequivocally mapped as the Habsburg Empire, shown as a territorially contiguous zone that spanned the boundaries of the Holy Roman Empire. 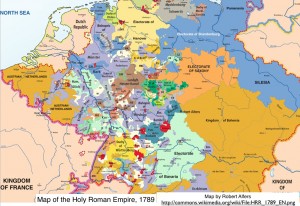 Even this intricate Euratlas map is at an inadequate scale of resolution to show the small German states. More detailed maps attempt to fill the gap. The second map, from the Wikipedia Commons, gives a fine-grained portrayal of the states of the so-called Holy Roman Empire as they existed in 1789. While it is remarkably rich in detail, even this mosaic fails to capture all the micro-polities of the time. The coloration scheme is also somewhat misleading, as a single color may indicate either different states of the same type (imperial cities in red; ecclesiastical lands in light purple), or single, discontiguous states (the Austrian [Habsburg] Empire in light orange-brown; Brandenburg-Prussia in slate blue). Notice the major territorial changes between the two maps, Austria having acquired the southern Low Countries from Spain, and Prussia (Brandenburg) having taken Silesia from Austria.

Such is our standard conception of Europe in the 1700s: a region cleanly divided among states of widely divergent sizes, with one vestigial “Empire” that had long since devolved into a non-sovereign federation. Educated Europeans of the time, however, had a markedly different conception of their continent’s constituent elements. Almost all maps of the time partitioned Europe into a handful of “countries” or “states” of roughly similar size, not all of which were sovereign entities. Sizable, compact, and potent states such as France, Portugal, Switzerland, the Netherlands (United Provinces), and Sweden were almost always mapped as such, appearing much as they do on our maps of the period. Smaller and less powerful states, however, disappear entirely, as do several of the larger states whose territorial integrity was compromised by fragmentation or by overlapping claims (notably those of the Holy Roman Empire, vestigial though it may have been). Sovereignty, in short, was not what mattered to early modern European cartographers. Far more important were historically and culturally constituted regional formations, conceptualized at roughly equivalent orders of magnitude. 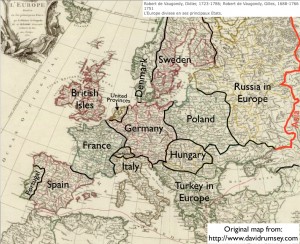 Consider, for example, the 1751 Robert de Vaugondy map posted here, entitled “Europe divided into its principle states.” (I have modified the map by enhancing the borders and translating and highlighting the place-labels.) Note the mapping of Italy and Germany (the latter coincident with the Holy Roman Empire) as separate “states.” Geographers at the time were well aware that neither formed a sovereign entity, but that was not the focus of their mapping. Note as well the absence of the Austrian (Habsburg) empire or Prussia-Brandenburg. That the ruler of Austria was styled an Emperor derived from the fact that the head of the Hapsburg dynasty was always elected to reign over the Holy Roman Empire; the notion of a separate “Austrian” or “Habsburg” empire is a modern construct rather than a feature of the time. Instead, the Habsburg dynasty was seen as having successfully acquired the crowns of various states, which retained their distinctive identity regardless of who ruled over them (just as England remained a separate country from the Netherlands during the period when William III was king of the former and stadtholder of the latter). The connections among the “Austrian” lands, in other words, were seen as more personal than geopolitical, easily undone though the vagaries of dynastic succession or military engagements—as indeed they often were. Geographers of the period did periodically redraw their boundaries to reflect changing political circumstances, but their maps registered far fewer changes than do ours of the same time period.

None of this is to argue that eighteenth-century mapping was superior to our cartographic reconstructions of the period. Both highlight some aspects of reality while obscuring others. My point is simply that sovereign entities need not always be the default building blocks of the human community—not now, and certainly not in the eighteenth century.

The next GeoCurrents post will examine more closely the mapping of the Holy Roman Empire during the 1700s, as a case study in the evolving concept of the territorially bounded sovereign state.