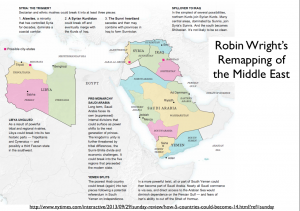 I was taken aback this past Sunday (September 29) by Robin Wright’s colorful map of a politically re-divided Middle East in the New York Times, which illustrated her article “Imagining a Remapped Middle East.” The map, entitled “How 5 Could Become 14,” shows a hypothetical future division of Libya, Iraq, Syria, Yemen, and Saudi Arabia into 14 potential new countries along with two additional city-states. I was immediately reminded of Ralph Peters’ troublesome remapping of the same region. As explained in a previous GeoCurrents post, Peters’ intriguing mental exercise in redrawing national boundaries was widely misinterpreted across the Muslim world as indicating a nefarious plot to enhance US power. As a result, the region’s pronounced anti-Americanism was further inflamed. 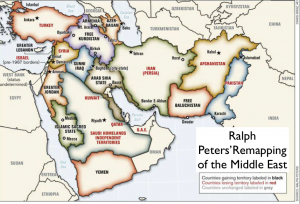 Wright’s article, however, shows that her purpose is different from that of Peters. Whereas Peters sought to depict a more rationally constituted political map, Wright rather speculates about a map that might be developing on its own, regardless of her personal preferences, much less her country’s geo-strategic designs. In this regard, the map has much to recommend it. Libya, Syria, Yemen, and Iraq could well be in the process of disintegration, splitting into de facto states or state-like entities that might bear some resemblance to the territories depicted by Wright’s map. The likelihood of Iraq and Syria regaining stability as effective states within their internationally recognized boundaries seems remote, given the viciousness of the conflicts currently being waged. As things already stand, the non-country of Iraqi Kurdistan is almost as much of a state as Iraq itself, and arguable more of a nation. Whether Libya and Yemen can politically reintegrate is also an open matter. Mapping how the Middle East appears today, rather than how the international political community thinks it should be configured, is thus an essential task. Thinking about where such processes might lead is equally important. Wright’s thoughts on the subject are generally insightful, and her map has many pertinent and intriguing features. I commend the New York Times for publishing such a provocative piece. 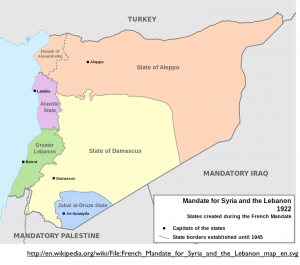 But that said, I do have a few quibbles, and a couple of serious misgivings, about the manner in which Wright has remapped the region. To take the minor points first, the Jabal al-Druze could not form a realistic city-state simply because it is too large and too rural (under the French mandate of Syria in the 1920s, the semi-autonomous Druze state was roughly the same size as both Lebanon and the semi-autonomous Alawite state). A second minor issue concerns Wright’s division of Yemen into two rather than three states; the Houthi rebellion among the Zaidi (sometimes mistakenly called “Fiver” Shiites) rebels of northwestern Yemen has as much pertinence as the rebellion that that would revive “South Yemen” in the southern and eastern parts of the country. A final quibble concerns Wright’s “Alawitestan,” which would actually be a minority Alawite state, barring the massive ethnic cleansing of Sunnis and Christians. 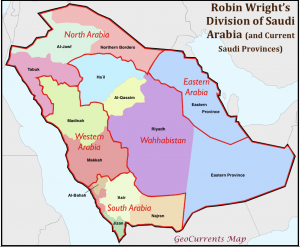 My serious misgivings concern Wright’s  treatment of Saudi Arabia. She realizes that she goes out on a limb here, noting that “The most fantastical ideas involve the Balkanization of Saudi Arabia…” Unlike the other countries that she remaps, Saudi Arabia is a relatively stable state, with no serious challenges to its territorial integrity. Imagining the division of this country thus does not involve speculating about the possible end-points of processes already in motion, as is the case in the other countries considered. It is not at all clear, moreover, why Wright has divided Saudi Arabia as she has, as her article is largely silent here. Presumably, her division is based on the idea that the non-Wahhabi peripheries of the country could detach themselves from the Wahhabi core, potentially resulting in the emergence of the new states of North Arabia, Eastern Arabia, South Arabia, and Western Arabia.

As a purely mental exercise, there is nothing wrong with imagining the possible division of a relatively stable country such as Saudi Arabia, even if it will—as Wright herself admits—“infuriate Arabs who suspect foreign plots to divide and weaken them…” Saudi Arabia’s stability, moreover, might not be a solid as it appears. The entire country, after all, is something of an anachronism; as the personal domain and namesake of the Al Saud family, its essence is premodern. The lack of a regular system of succession in an absolute monarchy based on the 15,000-strong House of Saud further clouds the country’s future. (Similar problems exist in neighboring Oman, as explored in a previous GeoCurrents post.) Saudi Arabia’s religions minorities, moreover, are sternly repressed and deeply restive in several peripheral areas. The fact that Saudi Arabia’s main Shiite zone along the Gulf is also the site of its main oilfields is an added complication, one that provokes Saudi fear about Iranian power and political-religious design.

The possible future division of Saudi Arabia is thus conceivable if unlikely, but it is a much further stretch to imagine that it would split into the units that Wright has mapped. Detaching the core region of the country, homeland of both the Saud family and the Wahhabi religion establishment, from the peripheries does make a certain amount of sense, but one must wonder whether such a maneuver is based more on rational analysis or wishful thinking. Considering the harsh nature of Wahhabi beliefs and practices, coupled with the fact that Saudi state struggles to spread those beliefs and practices across the Muslim world, it is understandable that an American scholar such as Wright would want to see the territorial reach of the Wahhabi establishment cut down to size. (Note that her map results in a landlocked “Wahhabistan,” unlike that of Peters, which at least gives her hypothetical rump “Saudi Homelands” access to the sea.) But shorn of its oil revenues as well as those stemming from the Hajj, it is highly questionable whether this region could maintain a stable state. Local resources and enterprises would not be nearly large enough to support central Arabia’s current population. 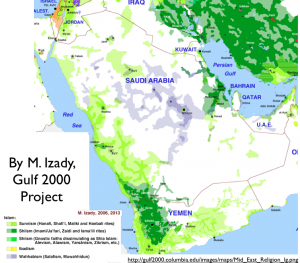 A deeper problem stems from the fact that much of Wright’s Wahhabistan is not actually majority Wahhabi, as can be seen in a comparison of her map with that of M. Izady (who idiosyncratically excludes Wahhabism from Sunni Islam). The key area here is Ha’il province, a historically non-Wahhabi area nonetheless ceded by Wright to Wahhabistan. Not only do most of the people of Ha’il practice a more mainstream version of Sunni Islam than those of Riyadh and Al-Qassim, but their province was the historical center of resistance in central Arabia against both the House of Saud and the Wahhabi clerics. Ha’il was the seat of the Rashidis, historical enemies of the Saudis, who were noted for their friendly tolerance of Shiites, a branch of Islam despised by the Wahhabis. Ha’il would thus fit much better with Wright’s “North Arabia” than with her “Wahhabistan.” Nor is it clear why Wright divides her North Arabia from her Western Arabia, as both regions are mostly mainstream Sunni in orientation.

Wright’s “South Arabia,” composed of four Saudi provinces and small section of a fifth, is also problematic. This region is indeed distinctive from the rest of Saudi Arabia, and is thus occasionally claimed as part of a would-be “Greater Yemen.” Yet little exists that would potentially hold this region together and provide glue for a new national identity. Most of this region is majority Sunni, but important Zaidi Shia communities are found near the border with Yemen (although Izady’s map might exaggerate their extent). Of all the sects of Shiite Islam, Zaidiyya is closest in form and content to Sunni Islam, but it also has a heritage of political autonomy that has nurtured the protracted rebellion across the border in northern Yemen. In Najran Province in the eastern portion of Wright’s South Arabia, however, a different religious community is demographically dominant: Ismaili Islam. This sect is invisible on Izady’s map, as it also falls into the general category of Shiism. But the Ismaili sect is quite distinctive from other varieties of Shiism, noted globally for its cosmopolitanism, devotion to secular education, and relative liberalism and gender egalitarianism. Not surprisingly, Ismailis in Najran have been deeply persecuted by the Saudi establishment. As noted by Human Rights Watch:

The Ismailis, a religious and ethnic minority with historic roots in Najran province of southwestern Saudi Arabia, face increasing threats to their identity as a result of official discrimination.  With the arrival of Prince Mish’al bin Sa’ud as the governor of Najran in 1996, tension between local authorities and the Ismaili population increased, culminating in a confrontation between armed Ismaili demonstrators and police and army units outside the Holiday Inn hotel in Najran city in April 2000. The ensuing crackdown continues to reverberate throughout the region to this day.