Mapping the Unlikely Break-Up of Nigeria

As the previous post argued, electoral geography indicates that Nigeria has a problem with national unity, as the winning candidate in the 2015 presidential election received extremely few votes in the southeastern corner of the country. Such evidence, however, should not be unduly emphasized, as a sense of national identity is well established across most of the country. As a result, I certainly do not expect Nigeria to collapse and be replaced by a group of successor states.

But that said, it remains true that quite a few Nigerians would like to see the dismantling of their country and the subsequent emergence of smaller and more ethnically and religiously united countries. Interesting discussions of this issue can be found in internet discussion boards, especially Nairaland Forum. As a result, a number of “post-Nigeria” maps have appeared on the internet. The remainder of this post will examine and analyze a few of these maps. 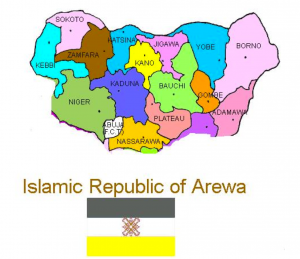 The most basic vision of a divided Nigeria splits the country along religious lines, separating the Muslim north from the mostly Christian south. The first map shows such an imagined division from a northern perspective. The term “Arewa,” used to denote the prospective Muslim state, is the Hausa word for “north.” As noted in the Wikipedia article on the word:

In post independence Nigeria, some use the word as a general term for Nigerian Hausaland: a contraction of “Arewacin Nijeriya” (Northern Nigeria). Much of the north was once politically united in the Northern Region, a federal division disbanded in 1967, and was previously home of the seven Hausa states, later the Sokoto Caliphate in the pre-colonial period, and the Northern Nigeria Protectorate under British colonial rule.

Northern Nigeria regionalist groups, such as the Arewa Consultative Forum, the Arewa Media Forum based in Kaduna, and the related Arewa House and Arewa People’s Congress are examples of this usage. These groups do not advocate independence from Nigeria, and focus on cultural unity of the so-called Hausa–Fulani community which forms the majority in the north of the nation.

Within even smaller regionalist circles, the term Arewa Republic is used as to describe a speculative future region, entity, or state that coincides with the pre-1967 Northern Region, Nigeria. 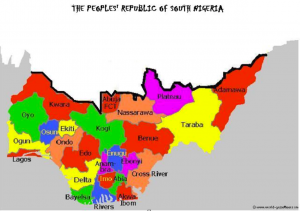 The second map shows an independent South Nigeria, imagined in this case from a leftist political perspective (note the use of “People’s Republic”). Although it may seem a relatively easy matter to separate the north from the south, the issue is complicated by the existence of the ethnically and religiously fragmented Middle Belt. As a result, the first two maps posted here show a significant degree of overlap, with such states as Plateau claimed by both groups. In any divisional scheme, Nigeria’s Middle Belt would prove problematic – as the region is today. This relatively lightly populated area is currently experiencing widespread violence that pits sedentary farmers against nomadic herders, a conflict that has pronounced religious and ethnic overtones. 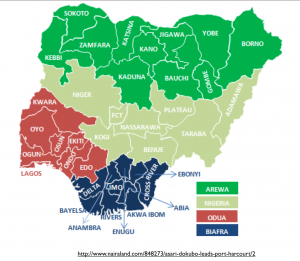 Some divisional schemes would address this problem by making the Middle Belt an independent country in its own right. Intriguingly, in one vision this is the only area that would retain the name “Nigeria.” Such finer-grained divisions generally separate the Yoruba-dominated southwest from the Igbo-dominated southeast. But for some futurist cartographers, such a division would not be fine enough, and as a result they envision additional states. One 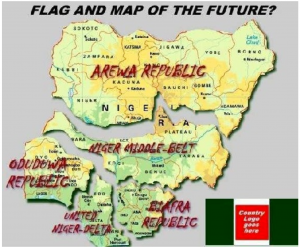 such fictional country is composed of the Edo-speaking region along with the ethnically mixed delta; this “United Niger-Delta” would be the wealthiest of the proposed Nigerian successor states by a significant margin. Some proponents of a Nigerian break-up also imagine the separation of the Hausa- and Fulani-speaking northwest and north-center from the Kanuri-speaking northeast, as can be seen in the upper-left map of the four-map set. 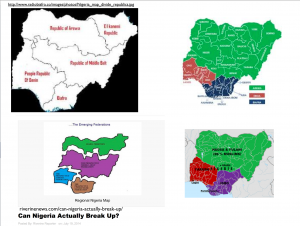 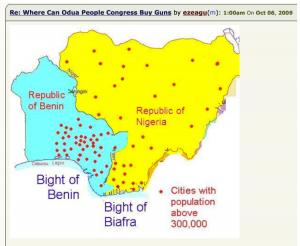 Few of these maps connect their imagined new states with areas located outside of Nigeria’s boundaries. A prominent exception, however, is found in the last map posted here, which envisages a greatly enlarged Republic of Benin. This country would include—and would be demographically and economically dominated by—southwestern Nigeria. Such a state would also be dominated by the Yoruba people, who are a minority group in the current Republic of Benin. Note that the old Edo-speaking Kingdom of Benin (now Nigeria’s Edo State) would also be included in this would-be country, as would much of the oil-rich delta.

Such imaginative maps of political devolution are by no means limited to Nigeria, and can instead be found in reference to most parts of the world. As a result, they should perhaps not be taken too seriously. But I do find them intriguing, and I think that they sometimes illustrate deeply embedded ideas about how the world should be politically organized.