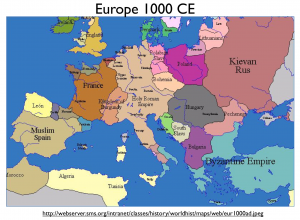 As numerous GeoCurrents posts have noted, the basic world political map is a misleading document, as it implies that the geopolitical order is much simpler than it actually is. The deceptive simplicity of the standard view is doubly problematic when applied to earlier times, when sovereignty was generally even more slippery than it is at present, and when clearly demarcated boundaries were often absent. In some times and places, particularly those conceptualized as “feudal,” sovereign power was parcelized in such a complex manner that political entities become almost impossible to map. The usual cartographic expedient is to simply depict the highest levels of the feudal hierarchy, such as the Kingdom of France circa 1000 CE or the Holy Roman Empire around 1500 CE, despite the fact that the actual powers of these large political entities were at those times quite limited. 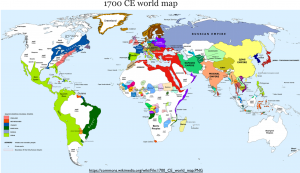 Early modern Japan of the Tokugawa period (1603-1868) was similarly characterized by a complex division of sovereignty among many unequal political entities. To be sure, one of these—the Tokugawa shogunate—effectively dominated the county as a whole, even though it was symbolically subordinate to the Emperor and his court. This dynasty of shoguns imposed peace on what had been a fractious and war-torn archipelago in the 16th century. As a result, world historical maps typically depict early modern Japan as a single, unified state, as seen in the Wikipedia “world in 1700” map posted here. (Note: This particular map erroneously portrays the entire northern island of Hokkaido as fully part of the Japanese realm, when in fact only its southernmost area was under direct Japanese control.)

The only acknowledged zone of ambiguity in the greater Japanese archipelago on many of these maps is the Ryukyu island chain, stretching between southern Japan and Taiwan. On the Wikipedia map posted here, this area is labeled as “near Japanese vassals.” In actuality this collection of islands formed the separate Ryukyu Kingdom, which paid tribute both to China and Japan—a useful strategy for maintaining profitable trade relations at a time when diplomatic ties between these rival East Asian powers had broken down. But although the Ryukyu Kingdom was a ceremonial vassal of the Tokugawa Shogun, in terms of actual power it was a foreign vassal of the Japanese daimyo (lord) of Satsuma, who ruled the southern portion of Kyushu Island under the suzerainty of the Tokugawa. As noted in the Wikipedia:

Japanese were prohibited from visiting Ryukyu without shogunal permission, and the Ryukyuans were forbidden from adopting Japanese names, clothes, or customs. They were even forbidden from divulging their knowledge of the Japanese language during their trips to Edo [Tokyo]; the Shimazu family, daimyo of Satsuma, gained great prestige by putting on a show of parading the King, officials, and other people of Ryukyu to and through Edo. As the only han* [domain] to have a king and an entire kingdom as vassals, Satsuma gained significantly from Ryukyu’s exoticness, reinforcing that it was an entire separate kingdom.

The geopolitical situation of early modern Japan, in short, was much more complex than what is indicated by most maps; it was not a politically unified country in the contemporary sense of the word. Its geopolitical character at the time has been vividly captured by Fabian Drixler, whose work on Japanese Buddhism and infanticide was described in a previous GeoCurrents post.

Drixler begins by noting that Japan experienced an unusually long reprieve from war under the Tokugawa, and then goes on to claim:

The Great Peace is even more remarkable if we think of Japan as not one country, but a collection of some 250 states and statelets. Each state had its own castle and samurai army, as well as a daimyo descended from men who had won power on the battlefield. Some of these states were no more than portfolios of widely scattered villages. But others were compact territories, called “countries” by their hundreds of thousands of inhabitants.

The Tokugawa maintained the peace not by crushing all their competitors, but by creating a system in which—for the first time in centuries—Japan’s ruling elite no longer needed to fear destruction at the hands of their peers. 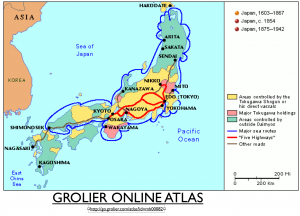 To be sure, some specialists have attempted to map the complexity of Japan’s geopolitical order during the Tokugawa period, but even in Japanese publications, the political cartography of the Tokugawa period is often surprisingly simplified. The most common strategy, seen in the maps 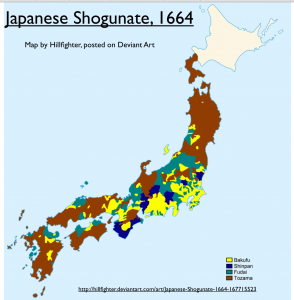 posted here, is to distinguish the domains controlled directly by the Tokugawa shoguns from those controlled by the daimyo, and then to subdivide the latter in terms of their relations to the Tokugawa clan. The fudai domains seen on these maps were ruled by hereditary vassals of Tokugawa Ieyasu, the founder of the dynasty, whereas 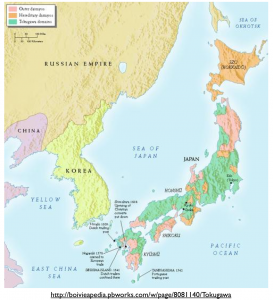 the shinpan were distant kin of the Tokugawa clan. The tozama lords, in contrast, were “outsiders” who only became vassals of the Tokugawa after the Battle of Sekigahara in 1600 that paved the way to Tokugawa dominance. Their domains tended to be located in the peripheries of Japan, and many were relatively large. When the shogunate fell in the Meiji Restoration of 1868, it was defeated by the combined military forces of three tozama domains—Satsuma, Chōshū and Tosa—all of which were located far from Japan’s centers of political and economic power.

Maps showing the distribution of power in Tokugawa Japan among these various categories are useful, but even these tend to be somewhat crude, aggregating sizable numbers of small lordships into composite categories. More important, as Drixler notes in a private correspondence, “the distinction between tozama, fudai, and shinpan may also have been less important than such maps suggest.” Significant territorial discrepancies are also found in the various maps posted here. A more comprehensive map of the geopolitical order of Tokugawa Japan would thus be highly beneficial. 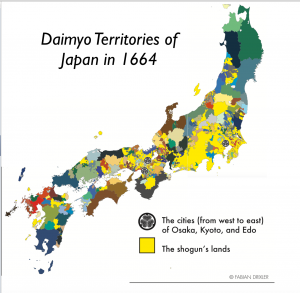 Fortunately, such a map is now available, thanks to the efforts, yet again, of Fabian Drixler. Drixler maps more than 200 different domains, yielding a landscape of stunning detail. His main map** sacrifices the larger aggregations of fudai, shinpan, and tozama, instead using separate colors to denote each domain in order to invite viewers to think of Tokugawa Japan as a multi-state system. He has made a separate map, however, that does distinguish these three different kinds of political territories while also differentiating the lands of shrines and temples as well as those of the court and emperor. 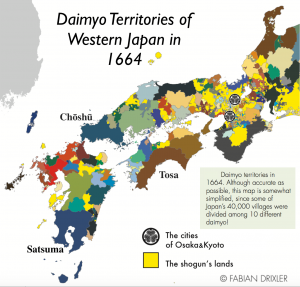 The most striking feature of the resulting map is the extraordinarily fine spatial divisions found in the core areas of Japan. While large domains predominate toward the edges of the archipelago, both the western heartland or Kansai (the greater Osaka/Kyoto region) and its counterpart in the east, the Kanto (a large plain surrounding Edo [Tokyo]) 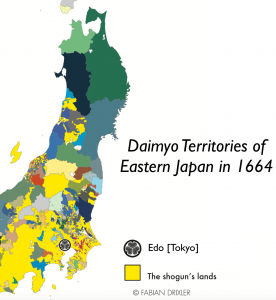 were political shatter-zones; both areas were fragmented among scores of loyal retainers. Intriguingly, this mirrors the spatial structure of the Holy Roman Empire at the time, whose larger constituent entities were similarly in the margins (particularly the east). 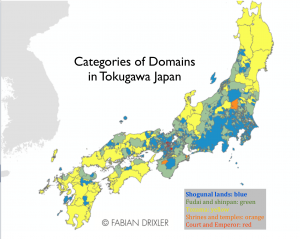 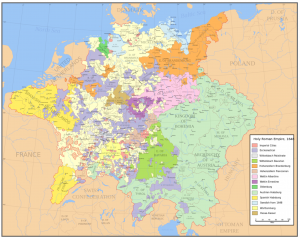 In both Japan and Germany, political unification*** was propelled from the periphery (Prussia in the case of Germany; Satsuma and Chōshū in the case the case of Japan). But whereas the new German Empire was centered in Prussia’s Berlin, the new rulers of a unified Japan returned the seat of power to Edo, renaming it Tokyo—the “Eastern Capital”— in the process. In Drixler’s view, this reflected an astute awareness that the new country might otherwise splinter into separate eastern and western states.

*Drixler notes that the term “han,” used in this Wikipedia article, is a loaded term, as it “encapsulates the perspective of the Tokugawa center, the ceremonial version of reality in which the other lords were just heading private clans rather than ruling their own states. Internally, domains did not call themselves ‘han,’ but used terms such as kuni or ryōbu.” The term “kuni” is often translated as “country.”

*** Such a comparison, however, may be a little too facile, as it evades the so-called German Question of the 1800s. This contentious issue divided those who conceived of German nationalism in terms of all German-speaking people from those who wanted to exclude the German-speakers from the Austrian (later, Austro-Hungarian) Empire. The envisaged states of these two camps were often referred to as Kleindeutschland (“Lesser Germany”) and Großdeutschland (“Greater Germany”). The proponents of “Lesser Germany” may have won the struggle in the 1860s and ‘70s, but the issue was not definitely settled until much later. As Drixler again perceptively notes in a private correspondence:

By calling itself the “German Empire,” the new state came to claim that name for itself, but it was really only in 1945 that Austrian and German became mutually exclusive categories. We now generally conceive of 1871 as “Prussia unifying Germany,” but I think this is reading history backwards.