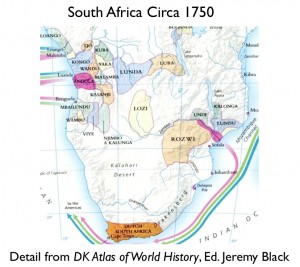 The deeper roots of dissatisfaction in Namibia’s Caprivi Strip (discussed in the previous post) extend to the colonial dissolution of the Lozi Kingdom of Barotseland. Centered in what is now western Zambia, Barotseland was one of the strongest indigenous polities of southern central Africa, controlling a broad swath of territory that encompassed the Caprivi Strip. Although the Strip was never predominantly Lozi in terms of ethnicity, the Lozi tongue (Silozi or Rozi) did become its common language. Barotseland also developed an incipient sense of national identity, which extended beyond the Lozi proper to include some of the kingdom’s affiliated ethnic groups. As a result, some Caprivi people look north to western Zambia rather then southeast to Namibia proper as the heartland of their political affiliation.

The Barotse issue, not surprisingly, burns much hotter in Western Zambia than it does in Namibia. In January 2011, clashes between Zambian security forces and demonstrators linked to a pro-secession group resulted in several deaths. Lozi leaders have demanded an apology from president Rupiah Banda for the killings, and they accuse him—like previous national leaders—of ignoring the developmental needs of the region. Such grievances are exacerbated, they maintain, by the fact that Banda won the last presidential election in part through the support of the Lozi electorate. A militant group called the Linyundangambo has discussed declaring the independence of Barotseland. Tensions are currently running so high in western Zambia that one risks a beating for singing the Zambian national anthem in public rather than the Barotse anthem.

The Zambian government, not surprisingly, stresses the need to maintain national unity, proclaiming “Nobody breaks away from Zambia; it’s a legal entity. Secession is not part of our constitution.” In attempting to defuse tensions in July 2011, President Rupiah Banda met with the Litunga of Barotseland, the region’s traditional monarch, who maintains a largely ceremonial position bolstered with extraordinary cultural prestige. Although many Lozi have hoped that the Litunga himself would advocate secession, his position has been more moderate. Instead, the BRE—the “Barotse Royal Establishment”—has demanded a review of the Barotse Agreement of 1964 that brought the kingdom into the newly established Republic of Zambia. The BRE claims, in a complex argument, that while the agreement did establish a unitary state, such a state was supposed to allow a regional government in Barotseland and reserve significant powers for the Litunga and his staff. Such legal claims, even if accepted by the Lusaka government, seem unlikely to satisfy demands of the more adamant Lozi nationalists. 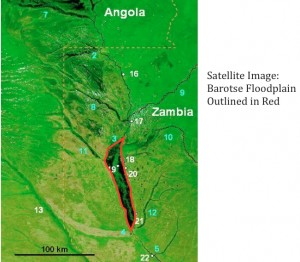 The Lozi kingdom is historically rooted in the distinctive environment of the Barotse Floodplain, a vast wetland some 230 kilometers long and 40 kilometers wide, located along the middle stretch of the upper Zambezi River. In the pre-colonial period, few areas of southern central Africa offered an environment productive enough to support the concentrated settlements and surplus foodstuffs necessary to underwrite a powerful, centralized polity. Soils are poor over much of the region and tsetse flies abound, preventing intensive cattle production. The Barotse floodplain, however, presents a different kind of environment. The river floods annually, turning the basin into a shallow lake and depositing a fresh layer of fertile silt. Flooding also prevents tree growth, which in turn precludes tsetse flies. Farming, fishing, and especially cattle herding on the Barotse Plain are quite productive, allowing relatively dense settlement. Flooding presents its own challenges, of course, as entire villages must seasonally relocate from the center to the margin of the plain. Intriguingly, Lozi oral traditions link the establishment of such annual migrations to the transition from female to male royal authority.* 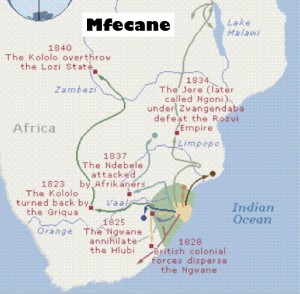 Once the Lozi, themselves 17th century immigrants to the region, learned how to take advantage of the floodplain, they were able to establish a powerful kingdom that exercised authority over a broad area. As was typical for the region, the Lozi polity was ethnically inclusive, able to fold various groups into its proto-national formation. The state was not without rivals, and in the early 1800s it fell to the Makololo, a southern people propelled north in the Mfecane, the scattering of southern African peoples occasioned by the rise of the Zulu kingdom and the depredations of the Europeans. The Makololo were overcome in 1864, but not before spreading their language. The modern Lozi tongue, Silozi, is closely related to Sesotho (the language of Lesotho and adjoining areas of South Africa). The original Lozi language seems to persist only in the rituals of the royal court. 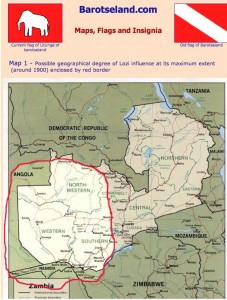 The British established relations with the Lozi during the Makololo interregnum. The famed doctor, explorer, and missionary David Livingstone was impressed with Barotseland and especially its monarch. In the late 1800s, the British South Africa Company gained an early mineral concession from the kingdom, which Cecil Rhodes and company regarded as tantamount to annexation. As the scramble for Africa reached its final stages at the turn of the century, Britain imposed a protectorate over the Lozi kingdom, allowing its monarchy to retain circumscribed authority.

The subsequent relationship between Britain and Barotseland remained ambiguous; as Wikipedia puts it, “Although having features of a charter colony, the treaty and charter gave the territory protectorate status although not as an official protectorate of the United Kingdom Government.” In any event, Barotseland was affiliated with other British holdings in an area known as Northern Rhodesia, which became Zambia when it gained independence in 1964. Throughout the colonial period, Lozi leaders pressed for autonomy as well as separation from the rest of Northern Rhodesia. As independence was being discussed in the early 1960s, some Lozi leaders expressed a preference for remaining under British “protection” rather than joining the new country of Zambia. Accession to Zambia came in 1964 with the signing of the Barotseland Agreement, but its terms were not followed. In 1968, the Zambian government changed the name of Barotse Province to Western Province, a move widely seen as deliberately insulting the Lozi people.

Lozi authorities would like to encourage tourism in the region, but they are hampered by its extremely poor infrastructure. As Barotseland.com unflinchingly puts it, “Vehicles on [the road from Lusaka] vary in reliability. Journey time can vary between 6 and 10 hours. Breakdowns are a frequent problem but this is still the most reliable mode of transport into the heart of Barotseland.” Zambia is currently trying to build a causeway across the Zambezi floodplain to increase accessibility, but thus far the project has been stymied by flooding and the lack of local rock and gravel. Much of southwestern Zambia, however, is slated for inclusion into the massive Kavango-Zambezi Transfrontier Conservation Area, a development that could substantially augment its tourism prospects. For such potential to be realized, infrastructure would have to be improved and security enhanced. Considering the frustrated aspirations of the Lozi people, such developments do not seem likely in the near term.

*Female royal authority is still found elsewhere in Zambia. In recent weeks, Zambian papers have been running multiple stories on the on-going feud between President Rupiah Banda and Chieftainess Nkomeshya Mukamabo II of the Soli people. The comments on the article linked to above from the Lusaka Times make interesting reading.